Emails recently released by the State Department from Hillary Clinton’s private server reveal that the former secretary of state and other officials had no knowledge of an American who had been abducted and then released by an Iraqi Shiite group, or why he was in Iraq, either.

The abduction was unusual because a Pentagon official told CNN that not even the man’s ex-wife knew that the man, Randy Michael Hultz, had been kidnapped. The Shiite militia who announced Hultz’s release claimed he was a U.S. soldier, but the U.S. Embassy in Baghdad said at the time he was “not an employee or contractor of the U.S. Government and was in Iraq on private business.”

The latest email, one of 881 posted Friday, shows senior State Department staff, including Clinton, trying to catch up on what had happened. The first email in the chain was released on New Year’s Eve, but seems to have been overlooked by the media.

“What do we now know about this guy?” Clinton asked on the chain.

James Jeffrey, the outgoing U.S. Ambassador to Iraq, joked on the chain, “We are incompetent nincompoops not worthy for the responsibilities our country has placed on us. Probably we should be replaced. Start with me. A better answer is, its a weird country and stuff happens.”

“U.S. citizen Randy Michael Hultz (DOB was released today after being held by an Iraqi splinter group for nine months. Hultz worked as a contractor at the Iraqi Ministry of Defense,” Spande wrote. “He is currently at the headquarters of the UN Mission Assistance Mission for Iraqi (UNAMI), and an Embassy Baghdad team including Diplomatic Security, Consular Affairs, and Defense Attache personnel are on their way to UNAMI. The embassy team will interview Mr. Hultz and determine next steps, likely including transporting Mr. Hultz to another location and, depending on whether he signs a Privacy Act Waiver, notifying next of kin.”

She added, “State Department Operations Center was notified of the release by UN Under Secretary General for Safety and Security Greg Starr. Starr, who was formerly the Director of the State Department’s Diplomatic Security Service, received a phone call from UN Deputy Special Representative for Iraq Gyorgi Busztin. Bustzin reported that the Iraqi Deputy Speaker of Parliament asked to visit UNAMI. When he arrived, he brought Hultz with him. Media report that Hultz was dressed in a military uniform.”

[dcquiz] “The UN reports that Hultz appears emaciated and exhausted, but has no other apparent medical issues or injuries,” Spande continued. “He has not yet been examined by medical personnel.
The Sadr group has told press that Hultz was turned over as a ‘goodwill gesture.'”

In his first reaction, Jeffrey, the ambassador, called the released hostage a “lucky ducky.”

Antony J. Blinken, deputy assistant to the president and national security advisor to the vice president, responded to Spande’s message with an email that was redacted by the State Department.

Jeffrey responded to Birken’s redacted message: “Cause we are incompetent nincompoops not worthy for the responsibilities our country has placed on us. Probably we should be replaced. Start with me. A better answer is, its a weird country and stuff happens.”

Senior advisor to the deputy secretary Edward F. Meier — who is currently director of policy outreach at Hillary for America — responded, “Funny. Classic Jim Jeffrey. I’m going to miss him.”

Two days later, Clinton asked, “What do we now know about this guy?” 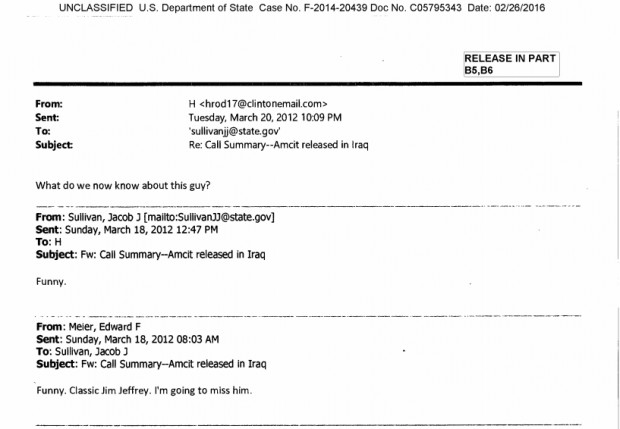 That’s the last email released in the chain, so unless it’s in an upcoming batch, the world might never learn the truth about the mystery hostage who seems to have been forgotten by the media after his release, since a Google search turned up no stories published after 2012.

The Shiite group that announced Hultz’s release held what The Associated Press called a “bizarre” press briefing, which can be viewed at this link.

“By the time the Sadrist lawmakers turned over Hultz to the United Nations mission in Baghdad, he was wearing a suit,” the Guardian reported. “One of the lawmakers, Maha al-Douri, said in an interview on Sunday that the wardrobe change was Hultz’s choice.”

Sadrist lawmaker Maha al-Douri claimed, “The decision to release the soldier was purely humanitarian because there is no reason to keep him any more after the end of the US withdrawal.”

The article continued, “Another senior Sadrist politician, Abdul-Hadi al-Matiri, said the kidnappers gave Hultz about $1,000 to buy an airplane ticket, his personal belongings and a Qur’an before he was released. He said Hultz was the sole survivor of an attack on a security patrol. His account could not be immediately verified.”

“Hultz did not wear any patches on his Amy green digitalized camouflage uniform that would identify his rank or what unit he may have served with,” the AP story continued. “According to the two ID cards displayed at the press conference, he was active-duty military from January 2004 to February 2005, and a U.S. contractor from December 2005 to November 2007.”

The article added, “Even Iraqi security forces were taken aback at the announcement. A senior Iraqi security official said intelligence indicated that the Promised Day Brigade had captured an American, but did not have enough reliable information to confirm it.”

“According to a 2010 interview with al-Hurra television station, Hultz described himself as the chief economic officer of Baghdad-based SAK Commodities, an investment and financing group also known as the Sanna Al Kassir General Trading Company,” CNN reported. “SAK Commodities, according to the reports, signed a number of contracts to assist the Ministry of Housing and Construction and construction firms to build houses and other buildings.”

The CNN article continued, “As CEO, Hultz met with some of Iraq’s powerful political players, including former Prime Minister Ayad Allawi. Photos of the two men and details of a March 2010 meeting in Baghdad were posted online by various business news groups.

“Is Washington too embarrassed to admit that the man taken captive last year and released last week by The Promised Day Brigade, Randy Michael Hultz, is an American soldier?” The Moderate Voice blog wondered.

Promised Day Brigade — “the armed wing of the Sadrist movement” — said in a statement, “U.S. Embassy claims that he is not a soldier are a desperate attempt to cover up the epic failure of U.S. occupation forces in Iraq, and Washington’s reluctance to disclose the dimensions of that loss to the American people. It wishes to avoid inciting further bitterness over the defeat that befell it at the hands of the great nation of Iraq.”

Al-Sumari News added, “The statement stressed that Brigade, ‘has shown the ID card of the American soldier, Corporal Randy Michael Hultz, who was ordered released by our resistance leader. This has been done to invalidate the falsehoods of the liars, who are trying desperately to poison the honey of the Brigade’s humane gesture before the world.'”