New York City Mayor Bill de Blasio signed an executive order Monday allowing the use of public bathrooms based on a person’s self-determined gender identity. The order will allow anyone in New York to use either a male or female bathroom in any public building based upon the gender with which they most directly identify, without having proof of gender on a state ID card.

“Access to bathrooms and other single-sex facilities is a fundamental human right that should not be restricted or denied to any individual,” de Blasio said. “Every New Yorker should feel safe in our city — and this starts with our city’s buildings.”

CBS Local New York news reported Bianey Garcia, a transgender activist, has felt ‘fear, frustration and disbelief’ before when being told he was not allowed to use the women’s restroom in NYC because he was a man.

“That day I felt humiliated, but like so many others I didn’t think of making a complaint or telling anyone… Access to the ladies’ bathroom is my right as a transgender woman, as a human being,” Garcia told CBS news.

While the order affects all public facilities — including parks, pools, some museums, recreation centers and others — it does not affect public schools. CBS N.Y. reported students are already allowed to choose locker rooms or bathrooms based on their gender identity, so the legislation would be redundant.

CBS-N.Y. also reported there is a bill awaiting a vote at the NYC city council that would require publicly available restrooms in public and private buildings be declared ‘gender-neutral’

“New York City is the birthplace of the fight for LGBT rights, and we continue to lead in that fight so every New Yorker can live with dignity,” de Blasio said.

The order affects a community of around 25,000 transgender people in N.Y., who represent 0.002 percent of the city’s 8.406 million population.

Bill de Blasio posted about the order on his Facebook account with the following photo and text: 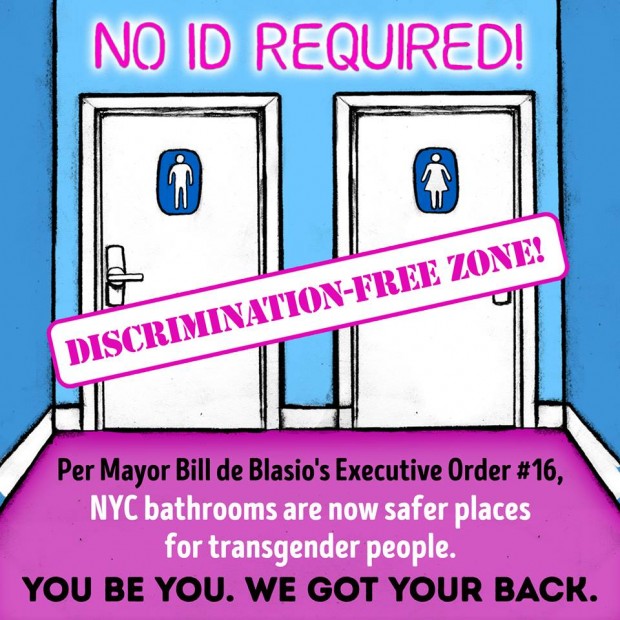 In New York City, we value diversity. We welcome everyone. We respect the rights of all—regardless of religion, immigration status, sexual orientation…or gender identity.

And we do not tolerate discrimination.