Democrats are more likely to think free trade has been good for the economy while Republicans and Independents are more skeptical, a new poll shows.

“Donald Trump, currently on track to become the Republican nominee, has promised to take action to protect American jobs from overseas competition and criticized free trade,” writes YouGov’s Peter Moore. “Hillary Clinton, under pressure from liberal critics, now opposes the Trans-Pacific Partnership despite having supported it in the past.” 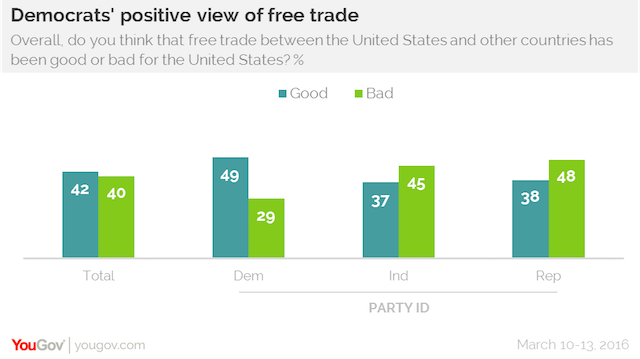 But the story gets a little more complicated when Democrats and Republicans are asked specifically whether they support raising import taxes. On this issue, there is more agreement between the two groups, with 52 percent of Republicans and 45 percent of Democrats saying they agreed with the policy.

On this issue, there is more agreement between the two groups, with 52 percent of Republicans and 45 percent of Democrats saying they agreed with the policy. 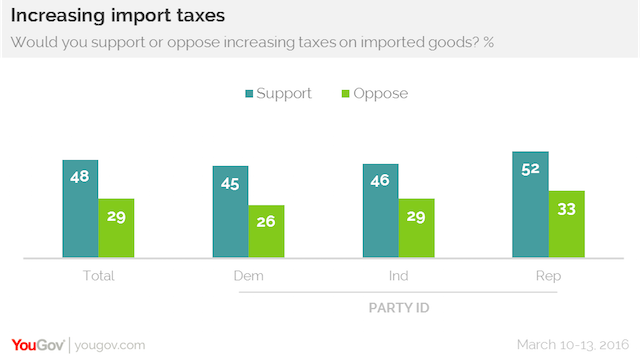 The dismal science of economics is rife with disagreements over theory and interpretation of data, but one thing almost all economists agree on is that free trade is a good idea.

The I.G.M. Economic Experts Panel, a survey is published by Chicago University examining a hot economic topic once a month, polled 51 distinguished economists on the question “freer trade improves productive efficiency and offers consumers better choices, and, in the long run, these gains are much larger than any effects on employment.”

[dcquiz] Not a single economist disagreed with this statement. A questionnaire to 100 members of the American Institute for Economic Research all with Ph.D.s in 2009, also showed overwhelming support for unfettered international trade.

Even the noble prize-winning economist and notorious left-winger Paul Krugman finds himself in agreement with free market heroes such as Milton Friedman on the question of trade. “If there were an Economist’s Creed, it would surely contain the affirmations ‘I understand the Principle of Comparative Advantage’ and ‘I advocate free trade'” says Krugman.

The Institute for International Economics estimates that over the past 50 years, freer trade has benefitted the average US household to the tune $9,000 per year.