Lyin’ Ted Cruz just used a picture of Melania from a G.Q. shoot in his ad. Be careful, Lyin’ Ted, or I will spill the beans on your wife! 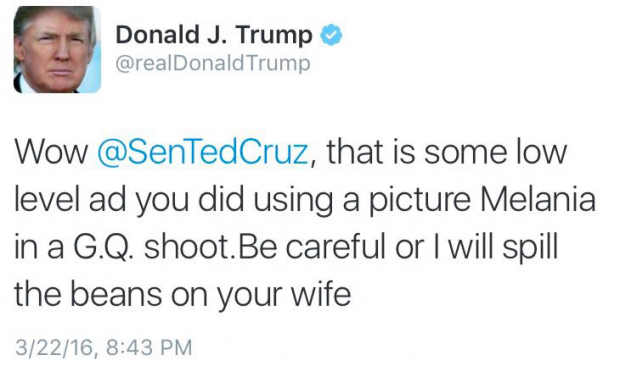 Trump appears to referencing an ad by the anti-Trump super PAC Make America Awesome, which used a semi-nude picture of Trump’s wife Melania. 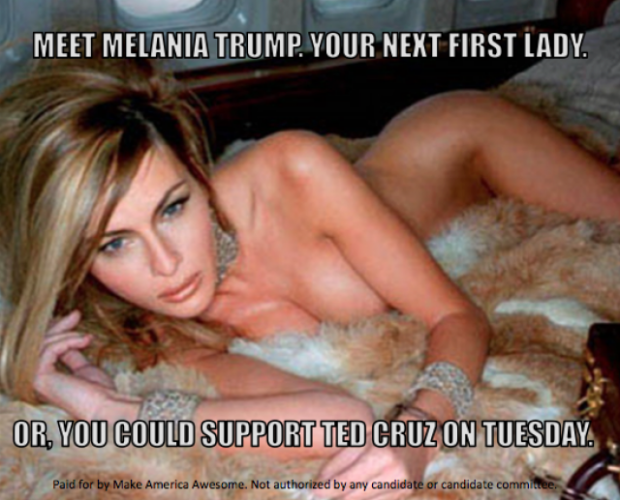 Exactly what “beans” Trump may have to spill on Heidi Cruz is not clear, but Trump has made similar threats against the owners of the Chicago Cubs.

I hear the Rickets family, who own the Chicago Cubs, are secretly spending $’s against me. They better be careful, they have a lot to hide!

Pic of your wife not from us. Donald, if you try to attack Heidi, you’re more of a coward than I thought. #classless https://t.co/0QpKSnjgnE

The Super PAC is run by former adviser to Wisconsin Governor Scott Walker Liz Mair. Federal law forbids Super PACs from coordinating with campaigns and there is no evidence Make America Awesome has any connection to the Cruz campaign.

.@amandacarpenter Yup. Trump team has done a PHENOMENAL job of getting our ad way more attention than we ever would have…

.@realDonaldTrump Hi Donald, I know you’re really upset about that ad, but it was Make America Awesome’s, not Ted Cruz’s.

Donald Trump is so desperate to beat Cruz that his team has been pushing around rumors she’s a criminal w a mental illness for weeks now.

Trumpkins whining about our ad have been referencing this in lots of emails to you. There, @realDonaldTrump, consider your “thunder” stolen.

Presumably, the reason @realDonaldTrump hasn’t said what his campaign has apparently been pushing his followers to say about Heidi…

…b/c @realDonaldTrump knows there’s a little thing called defamation law. Which doesn’t apply to our ad bc the Melania pic is real. LOLZ.