The Dow Jones Industrial Average gained 13 points but ended its five-week winning streak with an eerily calm trading day highlighted by mixed economic data and increased expectations for an interest rate hike by in April.

Although there’s speculation that the U.S. Federal Reserve is holding interest rates low to benefit the presidential candidacy of Hillary Clinton, one of the Fed’s most outspoken members suggested the U.S. economy was healthy enough for higher rates. St. Louis Federal Reserve President James Bullard turned heads this morning by joining a chorus of his compatriots to suggest the Fed would raise rates at least two times this year. However, it wouldn’t be the first time the Fed hinted toward one thing then did the complete opposite. 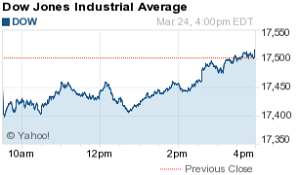 A federal judge said he’s concerned about allegations that the Federal Trade Commission attempted to manipulate testimony in order to halt a deal between Office Depot Inc. (Nasdaq: ODP) and Staples Inc. (Nasdaq: SPLS). Shares of both companies were up today after the judge spoke out on accusations that the FTC attempted to alter Amazon.com Inc.‘s (Nasdaq: AMZN) testimony on the possible deal. SPLS stock added 7%, while ODP shares gained 9%.

Oil prices fell today and logged their first weekly loss in over a month after the U.S. Energy Information Administration announced a massive rise in crude inventories. The EIA said domestic crude stocks increased by 9.4 million barrels. Total inventory now sits at a record 532.5 million barrels. WTI prices were off 0.8% to $39.46, while Brent crude oil was off 0.1% to $40.44. Shares of Chevron Corp. (NYSE: CVX) added 1.4% on the day.

On the economic front, the jobs market continued its tightening last week. The U.S. Labor Department said weekly jobless claims increased for the week ending March 19 by 6,000 to a seasonally adjusted 265,000. However, the federal government revised data dating all the way back to 2011 and found that claims remain lower than previous reports. Just three weeks ago, weekly claims fell to their lowest level since November 1973.

But the big talk today was that activist hedge fund Starboard Value is pushing to remove the entire board of directors at Yahoo! Inc. (Nasdaq: YHOO). Starboard announced it’s preparing to nominate nine directors to the company’s board, as the hedge fund remains discontent with the turnaround effort under CEO Marissa Mayer. This would be the largest company to ever have its full board of directors replaced by an activist investor. However, after evaluating the letter to the company, the threat appears to be little more than additional pressure to force Yahoo to conduct a deal to sell its core Internet business and to boost shareholder value.

Oil prices have suffered one of the worst crashes in modern history. But despite this week’s losses, WTI prices have seen a strong rally over the last month, and there’s one reason why they’ll keep going higher in 2016 and beyond…