Dow Jones Industrial Average News, 4/6/2016: The U.S. Federal Reserve continues to push back its timing for the next interest rate hike as concerns about the global economy weigh on the central bank’s expectations. That rate hike delay is actually fueling a rally. But unsupported by fundamentals, what we’ve seen in recent weeks is actually a “bear market rally.” Unfortunately, this rally is doomed, and the bear market is about to come out of hibernation.

Here’s what you need to know about the markets on Wednesday, April 6, 2016. 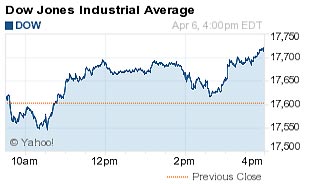 WTI crude oil prices today scored their biggest one-day jump since March 16 after Kuwait’s OPEC governor renewed hopes that global producers will freeze output at the meeting later this month. The boost is also due to the U.S. Energy Information Administration announcing that U.S. crude inventories slipped more than 4.9 million barrels last week. That’s a sharp contrast from the 2.3-million-barrel decline that economists anticipated. That said, the nation saw an unexpected inventory build in gasoline and distillates.

On the economic front, look out for speeches this evening from Federal Reserve members James Bullard and Rob Kaplan. This morning, the U.S. Gallup Job Creation Index increased to a rating of 32, its highest level in the eight-year history of the index. The index data indicated a sharp rise in nongovernment workers.

But the big talk today was the release of minutes from the Federal Reserve’s March meeting, where central bankers discussed the possibility of an interest rate hike. According to the minutes, Janet Yellen and her band of central bankers debated a possible rate hike in April; however, a consensus emerged stating that too many global economic risks justified a more cautious approach to monetary policy. Traders’ attention now turns to the policy meeting set for April 26-27. According to CME Group in Chicago, there is very little chance of a rate hike this month. CME FedWatch sets a 3% probability of a rate increase.