The average American pays 26.5 cents per gallon of gasoline in state taxes and another 18.4 cents per gallon in federal taxes, according to a Tuesday report by the Energy Information Administration (EIA).

Gas taxes vary widely by state, from a low of 8.95 cents per gallon in Alaska to a high of 51.4 cents per gallon in Pennsylvania, according to the Tuesday EIA report. Some cities, such as Chicago, impose additional gas taxes on top of the state and federal tax.

Governments generally use the funds raised from taxes on gasoline to build and maintain roads. 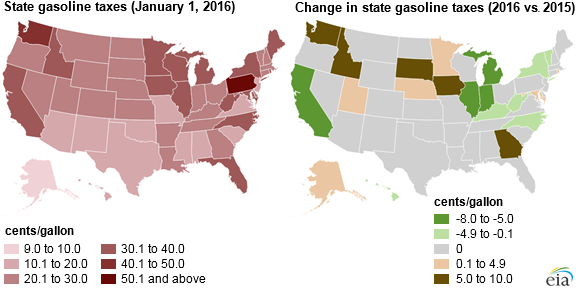 High gasoline taxes disproportionately harm poorer families and other lower-income groups. The poor tend to spend a higher proportion of their incomes on “basic needs” like gasoline, so any increase in prices hurts them the most.

The average American gas price dropped below $2 a gallon in January and is currently 33 cents per gallon less than it was at the same time last year, according to the American Automobile Association. Energy prices in general dropped by 41 percent over 2015 due to hydraulic fracturing, or fracking, according to a January EIA report.

Federal government energy experts predict that the national average gas price will remain below $2.00 a gallon for the year — the lowest projection since 2004. Just last year, consumers paid an annual average gasoline price of $2.40 per gallon.

U.S. consumers spent $370 billion on gasoline in 2014, including taxes, so any price change can have huge impacts on the average American’s wallet. The average American household likely saved $700 to $750 at the pump in 2015 according to analysis conducted last April by the EIA.