MSNBC’s Steve Kornacki revealed some tough news for Hillary Clinton including only 19 percent of voters consider her “honest and straightforward” and the words most associated with her are “nauseated” and “liar.”

Noting that only 19 percent of voters consider Clinton honest, Kornacki said, “This has been a huge issue. This has been a huge obstacle for her in this campaign. The honest and trustworthy question and that’s the risk of the e-mail story for her especially in light of this new report.” (RELATED: CNN’s Bash: IG Report Fuels Narrative That Hillary Thinks She Is Above The Rules [VIDEO])

Kornacki acknowledged that the email report “could bring [Clinton’s honest numbers] even lower.”

The MSNBC host then showed a word cloud on the screen that included words like liar, not trustworthy, sick, nauseated, scandals, and that the Clinton Foundation was corrupt. 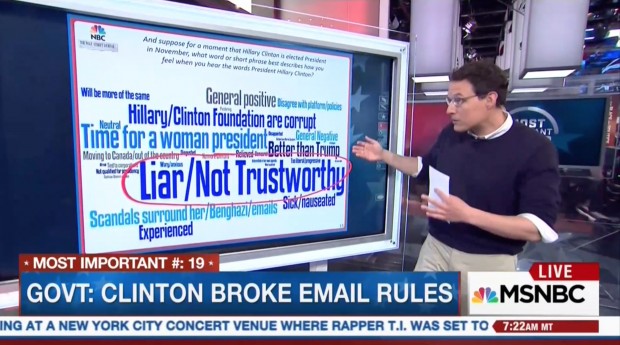