A judge in Chattanooga announced Thursday that ex-Politico labor reporter Mike Elk has to permanently steer clear of five downtown establishments. The ruling stemmed from an incident at a bar, The Honest Pint, in March, in which Elk was arrested on a host of charges that included public intoxication and resisting arrest.

Now Elk is firing back at the bar’s owner Matt Lewis (not to be confused with the esteemed Daily Caller columnist and CNN contributor), insisting that bar employees use cocaine and that he has a small penis.

“Chattanooga is a small town and the women in this town know Matt Lewis for how small his dick,” Elk wrote The Mirror. “Like microscopic small. Like seriously, I am not engaged in libel when I say Matt Lewis, the owner of the Honest Pint, is know all around Chattanooga for having basically the smallest dick in town.”

In regards to the employees, he said, “Sorry Betsy but those folks have no credibility. They are hardcore coke heads and their statements make no sense. Matt Lewis needs to stop shoving so much coke up his nose & start paying his workers.”

Elk’s side of the story is that he declined his last beer because he couldn’t afford it and even offered him his jacket to pay his bar tab.

“This is what happened when people are [sic] just dumb asshole – they just admitted a crime in writing to the daily caller,” he wrote The Mirror. “Like seriously I had 16 bucks and was like wait I didn’t order this beer and I don’t have enough money. The bartender was hitting on me [sic] It’s pretty clear the bartender was hitting on me. Look she complained about how I was on the phone – I mean who gives a fuck? These people have to get a life.”

In a statement to The Mirror, an Honest Pint employee who was there the night Elk got arrested called Elk’s phone use “rude.”

Elk sent me a screenshot of what he directly wrote to Lewis. 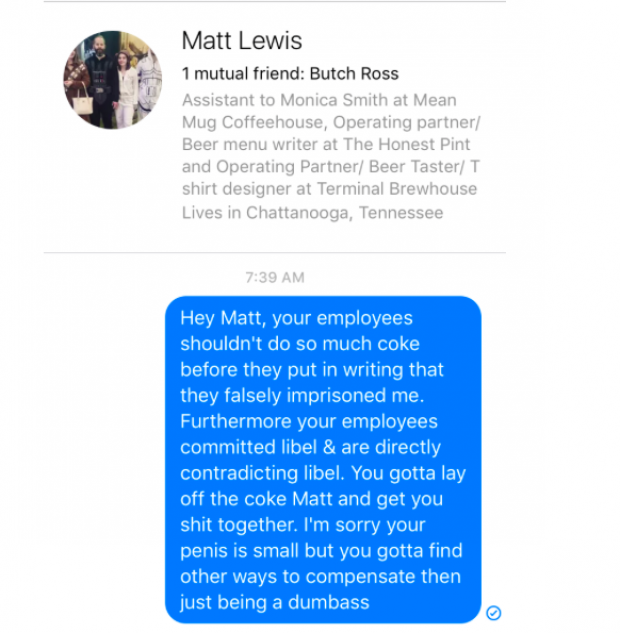 Elk also ranted about the verdict on Twitter, calling the bar employees and owner “losers” and “lame.” He remarked, “Seriously, Bets, you would hate a bar as lame as Honest Pint.Think Dubliners and imagine it being 20x worse.”

Elk maintains that the cops were out to get him because of his affiliation with union organizing.

“Hear the tape yourself,” he wrote on Twitter. “As soon as I said something about union, cop screams wrong team & roughs me up.”

The Mirror sought comment from Lewis, who was not immediately available to come to the phone.

UPDATE: Matt Lewis, the bar owner, returned The Mirror‘s call. He said he’s trying to stay off social media as much as possible. Here’s what he had to say:

“My guess is I’ll end up saying something that comes out wrong or fuels the fire. This is a person I’ve never met that was in a situation that he caused and is trying to turn it around on everybody, including me, and I don’t understand how that could even be. I don’t know on what planet that’s reality but apparently that’s his reality. Somehow I’ve become the straw man for this incident, which I find odd. None of us are yuppies. I’m certainly no yuppie. His assessment that I am an asshole developer is not true. I worked my way to the point where I worked my way out of my jobs…and then opened my own pub. What it seems like ….he’s just grabbing at whatever he can grab at to make it someone else’s fault. If he wouldn’t have been such a jerk to the bartender and try to bully my manager about his tab, they probably would have helped him out. The people who do this for a living, who were sober, sounds like they made every effort to figure this out. It’s obvious that he wasn’t reasonable because he resisted arrest. Then he tried to make the police the bad guy. Now somehow I’ve ended up the bad guy.”

Asked about Elk’s assertion that Lewis is not well endowed, Lewis replied, “I have no idea. Why would I respond to that? It doesn’t seem to have hurt my life any if that’s true. I’m not 15. Even if that was the case, it’s not something I sit around thinking about all the time. I tend to be a pretty private person. It’s why I don’t want to get in a huge social media debate with the guy. Sometimes it’s nice when the good guys win and I feel like we’re the good guys in this situation. He thinks he’s the good guy and I think he’s way off. He’s not the good guy.”