My gut says he’ll be back.

But for the time being, Breitbart News reporter Patrick Howley has voluntarily taken himself off Twitter. This is reminiscent of when Rosie O’Donnell left ABC’s “The View” the first time. Everyone anticipated her return. Boom — seven years later she was back. 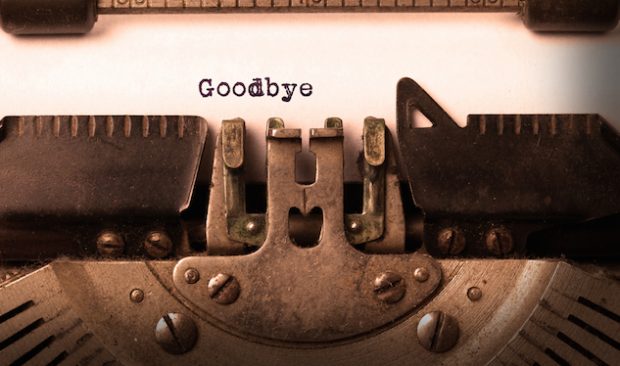 Some may recall that Howley was suspended from Breitbart News back in March when he voiced contempt for the “assault” situation involving then-fellow reporter Michelle Fields and then-Donald Trump campaign manager Corey Lewandowski. Howley had a viewpoint that was ultimately backed by his employers — he returned unscathed, Fields, a publicist and a few other reporters quit their jobs.

In the past week, Howley went on an animalistic tirade against some former coworkers at Washington Free Beacon and others — namely #NeverTrump consultants — in his line of fire. You can catch up on all that here.

In an exclusive letter to The Mirror, Howley explained his decision to leave Twitter. He’s leaving himself the option to return after the 2016 presidential election if he so chooses. “I think I’m done, but we’ll see,” he said. “Jordan came back. Gordie Howe came back. I’m not ruling it out, but for now I’m not in Twitter mode.”

Howley follows in the footsteps of Breitbart News editor Matthew Boyle, who put Twitter in the rearview mirror in March and hasn’t looked back.

It’s true. Since Kobe retired, I too have been thinking about when to hang it up, and I’ve decided to quit Twitter and go out on top. I enjoyed my time on there, and, let’s be honest, my tweets were pretty amazing. Kaitlan Collins even told me that she continuously refreshed my Twitter page so that she wouldn’t miss any updates. I don’t blame her. I wouldn’t want to miss any of my tweets either. But as John Lennon said, “The dream is over.”

Through it all, and I mean this sincerely, I just wanted to make the point that people should be able to say whatever they want on any medium. When I was tweeting politically incorrect things a few years ago, the Establishment people would literally panic. They didn’t know what to do! Nobody else was speaking their mind with no respect for the mainstream media’s Twitter authority. It was like a catharsis. I was truly an artist at tweeting. But I’ve made my point, and there are other great artists who are doing stunning work. Milo, obviously. Mike Cernovich is a brilliant mad scientist. The guy who did the “Conservative Pundit” parody account is great. Jordan Bloom and Rob Mariani’s Salon Dot Com parody account keeps humiliating the progressive Left. It’s fantastic. So, they’ve got it covered.

Twitter highlights just how sad the media has really become, especially on the Establishment Right. Back in the ’80s and ’90s, when The American Spectator was dominating political magazines, the Right was cool. It was irreverent, it was funny, it was stylish, it was interesting. Nowadays, political operatives and so-called “Thinkfluencers” have built a little Safe Space for themselves and they call themselves Conservative Media. The point is not to challenge assumptions but rather to craft party orthodoxy and purge anyone who thinks differently. And they do it on Twitter, which I think was their downfall.

They literally started their own political party! The Free Beacon, which nobody has ever heard of. The Weekly Standard, which has become a Ben Sasse fanzine. IJ Review, which is some thing for millenials that I don’t pay attention to. The Washington Examiner, which is the most execrable publication in all of journalism. I see the Washington Examiner sometimes on the floor of the Metro like a Jack Chick cartoon. What a pointless waste of Phil Anschutz’s money. So then these people started a political party and rallied around David French for president! There was a moment not long ago when Bethany Mandel, some person I had never heard of who I guess is in their crowd, said, and I quote, “If you’re a supposed conservative and you don’t know who David French was before today, it explains why you’re voting for Trump.” I looked at that, and I knew she meant it earnestly. I’m sure she’s a nice person and whatnot, but I just thought, ‘This has gotten sad. These people are a parody of themselves now.’ And I just don’t care to even look at what they have to say.

Anyway, I have a much better platform. I write articles for Breitbart, they get 10,000 comments. Breitbart is now the number-one political news organization in the world on social media. I go on our smash hit radio show on Sirius/XM and take calls and talk directly to America. And I also recently blew the lid off key details of the Obama administration’s intervention in Syria and the fact that the U.S. was supporting the group that became ISIS. So, obviously, that’s been taking up a lot of my time these days.

So, I’m off Twitter, probably forever, at least through the election. I’m very, very busy. But I always make time for you Betsy! You’re like my spirit guide. Stay in trouble.

Full disclosure: Howley formerly worked at The Daily Caller, where he often ate Barbecue Cheetos at a desk located diagonally from mine.