Hopes of a second referendum on Brexit are fading fast, with a new poll showing overwhelming opposition to a fresh vote.

Less than a week after the U.K. voted to leave the EU, 58 percent of Brits say there shouldn’t be a second referendum, while just 31 percent disagree.

Bitter europhiles incensed by the loss of the Brexit referendum have taken to the streets demanding Parliament ignore the people’s will. A petition for a second referendum passed four million signatures Wednesday, with Labour MP David Lammy lodging a formal motion in the House of Commons to discuss the possibility of a second vote. 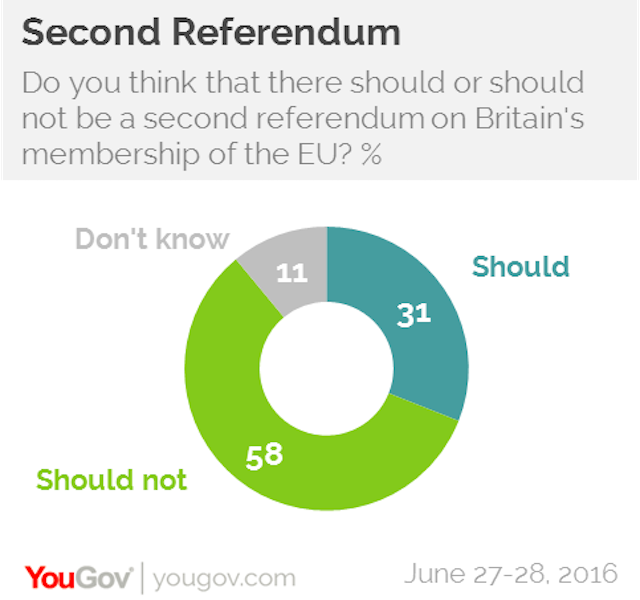 “We the undersigned call upon HM Government to implement a rule that if the remain or leave vote is less than 60 percent based on a turnout less than 75 percent there should be another referendum,” the petition, filed Friday morning, reads. (RELATED: Bitter Europhiles Try To Reverse Brexit Vote With A Petition)

England soccer fans disappointed by Monday’s 2-1 loss to Iceland took the opportunity to mock the sour grapes of remain supporters. They set-up their own petition calling for a re-match. Brexit’s Leavers won the referendum 52-48 percent, with a total of 17,410,742 votes.

One of the biggest threats the Remain campaign propagated was that a Brexit vote would trigger another vote on Scottish independence which could, in turn, lead to the breakup of the UK.

Even if Scotland left the UK, the numbers don’t change and 58 percent would still be against a second vote on Brexit, says YouGov.