— Republican strategist/pundit Mary Matalin on MSNBC’s “With All Due Respect” on who Donald Trump‘s Vice Prez pick will be.

“I like to think a shared revulsion and loathing for Nancy Grace has brought Americans together in unity.” — David Burge, Iowahawkblog.

A question for us all…

“So…why did the Washington Post and not the New Yorker discover that Gay Talese’s source was so rotten?” — Jack Mirkwinson, Fusion editor.

“Every time I spot new gray hairs, I think of @davidsirota – to be a hard hitting journalists these days means u go Grey in your thirties.” — Ex-Politico labor reporter Mike Elk.

WANTED: BuzzFeed is hiring a Managing Editor for its DC Bureau

See here. Must be willing to “work hard and stay late” and work at a place that “revels in the serious and the fun.”

Cooke is editor of NationalReviewOnline.

“But remember folks, racism is a thing that the media and Al Sharpton have teamed together to make up. Definitely doesn’t exist.” — WaPo race reporter Wesley Lowery.

(Shapiro says he did not call Kohn a jerk. Kohn insists Shapiro called her a jerk and some other shit.) 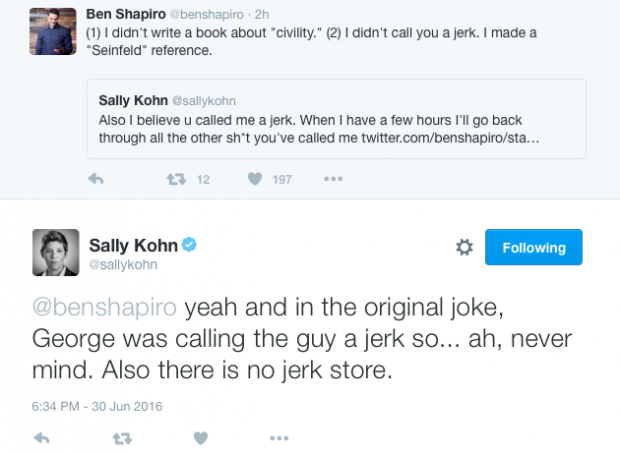 Just what the world needs: A cookbook from Weight Watchers’ Spokeswoman

This is the painting that serves as Mika’s Twitter photo.

And this is the photo that serves as Joe’s Twitter photo.

“I think the whole Joe and Mika thing’s great. Love’s grand. But it can kill a show. Sexual tension’s one thing. This could kill the energy.” — Lionel.

“I think the whole Joe and Mika thing’s great. Love’s grand. But it can kill a show. Sexual tension’s one thing. This could kill the energy.” — Snarkaroni.

“How Many Broom Closets At 30 Rock Have Joe And Mika Used To Bump Uglies?” — Wonkette.

“I imagine Joe and Mika’s pillow talk is just Joe putting Mika down and repeatedly cutting her off in front of a group of people.” –– Katherine Krueger, breaking news editor, TPM.

“Am I the last person to know about Joe and Mika? Geez.” — Donna.

“It’s the End Times, Because Mika Brzezinski Might Be Doin’ It With Joe Scarborough” — Jezebel headline on a story by Bobby Finger.

The pair get the Daily Mail treatment…