A Colorado Republican who allegedly posted a meme on Facebook comparing Barack Obama to a chimp has resigned.

Delta County Republican Committee Chairwoman Linda Sorenson faced major criticism over a picture of Ronald Reagan bottle feeding a chimpanzee that was posted to Sorenson’s Facebook account in June. Written on the picture was, “I’ll be damned … Reagan used to babysit Obama!” Sorenson originally claimed someone hacked her account and posted the picture, but Colorado GOP Chairman Steve House said that wasn’t true, The Grand Junction Daily Sentinel reports. Sorenson told a blogger that she didn’t care if anyone was offended.

Later, she admitted she “liked” the meme and apologized, saying she actually did care if others were offended.

“Linda is not the most Facebook adept person,” House told CBS4. “This is an internet meme that’s been going around for years. What Linda did was she saw the post on Facebook and thought she ‘liked’ it, but instead it was shared on her account.”

Sorenson was already under scrutiny for accusations that she broke party rules by showing favoritism to one Republican primary candidate.

“Mrs. Sorenson’s reference to President Obama being a monkey is more than bad taste,” Sondra Young said at a press conference on behalf of NCAAP Denver. “It is more than disrespectful. It is a direct example of how racism is acceptable humor in our society. This is unacceptable because racism isn’t a laughing matter.” 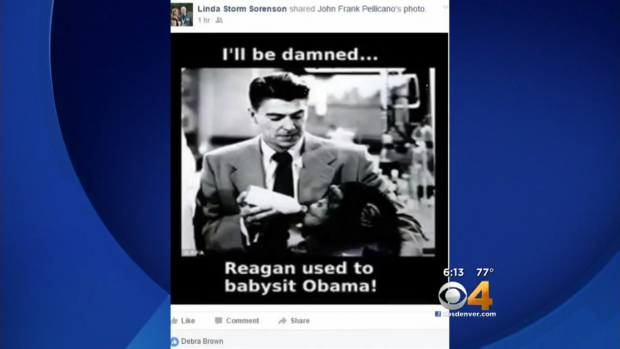