Let’s start with the obvious: The MC-28 takes a lot of design cues from a well-known, albeit recent, design—so much so it actually fits in molded-Kydex holsters made for said design. There’s no getting around the similarity between the MC-28 and the Smith & Wesson M&P; from the overall shape to the controls, the two pistols are strikingly comparable.

What’s different, however, is immediately evident in the trigger—that “trigger-in-a-trigger” safety is more commonly found on handguns from Glock or Springfield Armory than Smith & Wesson. Also different from the M&P—but not to another handgun to wear the S&W rollmark, the SW99—is the cocking indicator on the back of the slide. A splash of red paint on the end of the striker provides immediate notification whether or not the pistol is cocked. The Ruger SR series has such an indicator, and there are those out there who prefer such a notice. The indicator is useful, as the trigger springs forward once pulled, unlike that of the Glock, which remains flat against the grip once dry-fired.

(l.) An accessory rail for light, laser or both is expected in a full-size pistol, and the MC-28’s rail is a three-slot variant. (ctr.) Unique among its peers, the MC-28 has a red cocking indicator that divulges the striker’s status. (r.) Containing the “trigger-in-a-trigger” safety mechanism we’ve come to expect, the MC-28’s action smoothed out considerably during testing.

–
Also harkening back to the days of the P99/SW99, the interchangeable-backstrap concept has been embraced by the firearm community. Most modern polymer pistols incorporate some method of fitting the grip to the hand, from the two-position backstrap of the Ruger SR family of pistols to the 27 different configurations of the Heckler & Koch VP9. The MC-28 comes with small, medium and large backstraps to custom-fit to your hand, with the small strap little more than a cover for the grip and the large incorporating a small beavertail. Swapping the backstraps is accomplished with a simple punch (included) that drives out a pin at the bottom rear of the grip.

Dovetail-mounted should changes need to be made, both front and rear sights are simple, adjustable white dots.
–

If you’re conversant with striker-fired handguns, the MC-28 should be a breeze to learn. No safeties, save the trigger-mounted one, only two levers (slide stop and takedown) and a standard, run-of-the-mill magazine release (which can be swapped to the other side for southpaws) all contribute to a familiar feel and uncluttered design. Once you’ve decided which backstrap works best, you only need decide whether to add a light, laser or both to the accessory rail.

Takedown is also quite familiar, but with a twist. The MC-28 has a takedown lever, like the M&P, but requires the trigger be pulled as in the Glock manual-of-arms. Be diligent about ensuring the pistol is unloaded, then drop the magazine and lock the slide back. Rotate the takedown lever 90 degrees, then release the slide. Pull the trigger while continuing to hold the slide, as it will release the slide and launch it forward if you’re not at the ready. (Don’t ask me how I know this.) Remove the guide rod and captive recoil spring, take the barrel out of the slide and disassembly is complete. Reverse order (without pulling the trigger, of course) to reassemble.

(l.) Starting with a molded plastic box, the list of accessories that come with the MC-28 is impressive: three magazines, three backstraps, cleaning equipment, magazine loader and a cable lock are all included with the pistol. (r.) While 15 rounds isn’t low- capacity for a handgun of this size, it’s a bit on the small side when compared with the 17- to 20-round magazines found in similar pistols.
–

On the range, the MC-28 was quite surprising. Not knowing what to expect from a sub-$400 firearm, I brought a variety of full-metal-jacket (FMJ) and jacketed hollow-point (JHP) ammunition from different manufacturers, including common practice fodder like Federal’s American Eagle. The very first round, a name-brand FMJ, failed to chamber, getting hung up on the feed ramp—an inauspicious start to testing. However, that was literally the only problem encountered in approximately 500 rounds of testing, and I’m comfortable chalking up that one lone glitch to it being a brand-new gun. Every other round fed, fired and ejected cleanly.

Accuracy-wise, the MC-28 can easily hold its own with my M&P9, which has the Apex trigger upgrade. The MC-28’s trigger did take about 100 rounds to smooth out, with 10-yard groups not terrible at the start, but shrinking to very respectable sizes once the pistol had a chance to break in. Dot-torture testing gave results commiserate with the shooter’s expertise (meaning that misses were my fault, not the gun’s) and at distances varying from 5 to 10 yards, the MC-28 acquitted itself quite well. Accuracy and reliability with the MC-28 were on par with my Glock G19 and my Smith & Wesson M&P9.

So, what’s the appeal? Quite simply, the price. The MSRP of the MC-28 is $399; importer Zenith Firearms offers the pistol for $349. That’s for a new pistol, with three 15-round magazines, a magazine loader, cleaning rod and even a tube of oil. Whether you’re interested in the M&P but don’t quite have the budget or you already have an M&P and are looking for a backup handgun, the MC-28 is quite an appealing prospect. 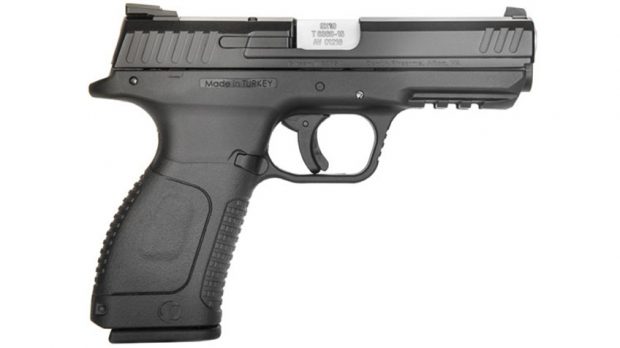