An image-cultivating, deal-making American expatriate who seemingly could talk himself into almost any job despite lacking essential skills and work ethic, bamboozled a top federal housing agency into putting him in charge of a $1.5 trillion portfolio of mortgage guarantees.

Multiple documents and interviews assembled by The Daily Caller News Foundation show that David Fender, chief financial officer of the Government National Mortgage Association — a.k.a. Ginnie Mae —  from 2014 to 2015, is a serial con artist operating a network of shell companies who has left a string of debts behind in the U.S. even as he claims to have accumulated huge sums offshore. Ginnie Mae is an agency within the U.S. Department of Housing and Urban Development (HUD).

Fender was fired from his previous job for running a side business using its resources, then lied about being a certified public accountant to get Ginnie Mae’s top money job and did the same thing there. His incompetence plunged the mortgage backer into such chaos that $6.6 billion couldn’t be accounted for, The Daily Caller News Foundation reported Sunday.

After being terminated by Ginnie Mae for deception, fraud and failure to pay taxes, Fender now teaches criminal psychology, accounting, marketing and fraud at Temple University’s Japan outpost, while continuing to run his side business, which seeks government contracts.

Fender spent the decade before his Ginnie Mae tenure in Japan arranging business deals by using his Japanese language skills to serve as a middleman linking Asian and U.S. companies, then keeping a cut for himself. He grew up in Montana, married a Japanese woman and learned the language.

His resume included such ventures as, for example, founding Incian Online Shopping Mall and working there from 2004 to 2012. There is no online record of such a firm. In a phone call, Fender said that Incian was a Korean company he sold for $5 million.

Fender’s Cold Energy Systems claims to sell steel tanks, mostly to foreign governments, including Japan, which uses the tanks to store contaminated water at the Fukushima nuclear power plant disaster. But much of Cold Energy appears to be a sham.

Its website lists a “West Coast Support Office” at the address of a manufacturing plant called Spartan Inc., that appeared to provide the actual capability for the steel tank business, except that David Finney, Spartan’s general manager, told TheDCNF that he’s “never heard of” Cold Energy Systems.”

Finney vowed that “as soon as I get off the line, I’m going to have my freaking lawyer write him a letter. He’s coming here and soliciting us and he’s a complete freaking waste of time,” after considering whether he had ever heard the name David Fender.” 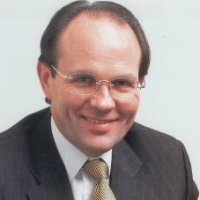 Cold Energy’s “USA Headquarters” is at the address of Wyoming Corporate Services, a company that sells “shelf companies,” false corporate entities that are “aged” for years and then sold, to hide assets and who controls them and presents the illusion of legitimacy. A Reuters investigation called it the “Cayman Island on the Great Plains.”

Reuters noted that Wyoming Corporate Services advertised on its web site that “a corporation is a legal person created by state statute that can be used as a fall guy, a servant, a good friend or a decoy … a person you control … yet cannot be held accountable for its actions. Imagine the possibilities!”

While working for Ginnie Mae, Fender listed its government building as the address of Cold Energy’s “USA Government Support Office,” apparently seeking to use a seemingly official status to lure other governments into hiring it.

After HUD officials caught him basing his company out of its offices, he changed the “Government Support Office” to “Suite 103” of a Silver Spring, Maryland building. The suite is actually an apartment where Fender lived with his elderly mother years ago.

The current tenant of the apartment told TheDCNF that she receives a stream of collections notices addressed to Fender or his companies in the mail. “I figured he was someone who had a lot of debts,” she said.

While he worked corporate jobs, he appears to have engaged in high-flying solo deals, which mostly didn’t pan out. In 2010, presenting himself as the head of a Hong Kong-based company called the Cougar Group, he entered into a $10 million deal to act as a sales agent for a New York company, saying he had the ability to move massive amounts of products abroad. But a year later, he had “not met the agreed sales targets” and the deal “was cancelled for non-performance.”

Supplying tanks to Fukushima is a massive task with huge monetary rewards, but if Fender is even equipped to do so, it is not clear what his role is. A Forbes article earlier this year said Kurion is “the only international operator” working on the cleanup.

Cold Energy’s website said it is also “Bringing the Aerial Super Highway to Japan,” describing a large-scale network of kites that would act as flying wind turbines.

Doug Selsam, who is involved in wind energy, said Fender approached him about using his technology in a deal, but Selsam determined Fender didn’t know what he was talking about.

“He was interested in my technology briefly and I think he got the flavor right away that I was not a fellow BS artist … You don’t take an unproven prototype and use it in a disaster zone … I laughed in his face.”

Larkin said about Fender’s many business ventures, “He’s a busy man.” He said Cold Energy Systems was a U.S. entity based in Wyoming because there is no state income tax but that federal taxes “will be paid” on the money the company is earning.

Fender had a federal tax lien of $128,000 while he worked at Ginnie Mae. Larkin said that has “all been straightened out.” It is unclear why Fender needed an accountant, or had tax debts, since he represented himself to Ginnie Mae as an accounting expert, and teaches accounting.

Fender told TheDCNF that he convinced the IRS to drop the lien. “I only had to refile four times,” he said.

His teaching bio says “I have launched an energy company, Cold Energy Systems, and already have been acquired in an M&A deal with a publicly listed company on the NASDAQ.” In the phone interview, Fender first said it was referring to a different company, then said that there are Korean, Malaysian and Filipino incarnations of Cold Energy Systems, and one of them had been acquired by Samsung, before abruptly hanging up.

He also said shortly before going to Ginnie Mae, he took a job with Connaught Energy hawking his energy systems but it “didn’t work out.” He said he took the job in D.C. to be near his mom.

Fender told government investigators that profits stayed offshore because it was a Japanese company.

Fender was somehow whisked through the federal government’s prestigious Qualifications Review Board, the body that approves the qualifications of the government’s highest-paid career managers, the Senior Executive Service. Ginnie Mae paid Fender $179,000.

They didn’t figure out that many of his credentials were lies, that his background as a mediocre salesman wasn’t suited for the job, and that his previous boss warned the government not to hire him. His bluster got him through, an inspector general’s report obtained by TheDCNF said.

A supervisor told investigators they hired him “because he ‘interviewed well’ and the other applicants ‘seemed reserved about what they could do.’ [Fender] ‘spoke as though he could do anything asked of him.’”

But they “quickly started seeing that Fender did not have the necessary skills, and likely exaggerated his experience… [supervisors] began to notice that Fender was not completely honest … Fender told him what he wanted to hear, and not the truth.”

When they learned that even his claim to be a certified public accountant was more marketing than truth, they “thought it characteristic of Fender to purport himself as a [CPA] when in fact he was not.”

His supervisor said “she’s had problems with Fender since he started … he has also been disrespectful and harsh towards his own staff and OIG auditors, and feels as though none of his employees have trust or confidence in him. [She said] she has already drafted a Letter of Termination for Fender … and is awaiting approval.”

But Fender has a way of landing on his feet. His Temple University faculty page says that in his class “we learn the ways to ‘cook the books’ with parked inventory sales to swap transactions to channel stuffing to side deals to accelerated revenue to capitalizing expenses to deferring expenses. We review Enron, Worldcom, Olympus and other famous fraud cases. We discuss in detail ways to commit fraud and money laundering.”

Part 3: HUD Looks The Other Way At Criminals On Its Payroll