Myth-busting website Snopes flagrantly lied about the lack of visible American flags on the first day of the Democratic Convention, claiming an image from the second day of the convention was actually from the first day in an attempt to debunk a factual story from The Daily Caller.

First, the facts. TheDC reported on Monday about the lack of visible American flags at day one of the convention. Several flags were briefly on stage for the national anthem and pledge of allegiance, at which point they were carried off stage, as the C-SPAN video for Monday clearly shows at the 35:40 mark. Even PolitiFact, which tends to lean to the left, noted that “when the color guard left, so did the physical flag.” After that point, the stage was devoid of any American flags for the remainder of day one.

As reported by TheDC, the DNC added flags to the stage for the second day of the convention — Tuesday, July 26. That same day, Snopes writer Dan Evon wrote a “fact-check” article declaring it “false” that: “No American flags were on display at the 2016 Democratic National Convention.”

Evon offered as proof A) a screenshot from PBS’ coverage of day one, taken during the pledge of allegiance — before the flags were removed — and B) the below screenshot of C-SPAN’s day two coverage (visible at the 6:36 mark here) and claimed it was from day one of the convention. In fact, Mallory Weggemann — the paralympic swimmer who gave Tuesday’s pledge of allegiance — can be seen sitting in her wheelchair as the flag-bearers walk past her. 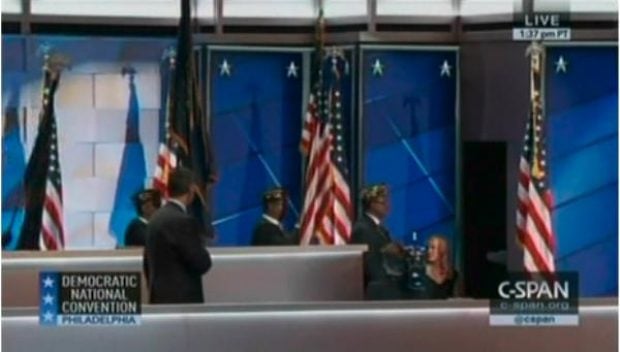 Snopes presented the above image as a screenshot from day one of the convention, captioning it: “Contrary to claims that flags were added to the DNC’s staging only after the Democrats were criticized for not displaying any flags at the event, photographs captured U.S. flags being set up on the stage prior to the start of the convention and in place on the stage during Day 1 of the event.” In other words, Snopes — which presents itself as a credible media source for debunking lies on the internet — flat out lied. 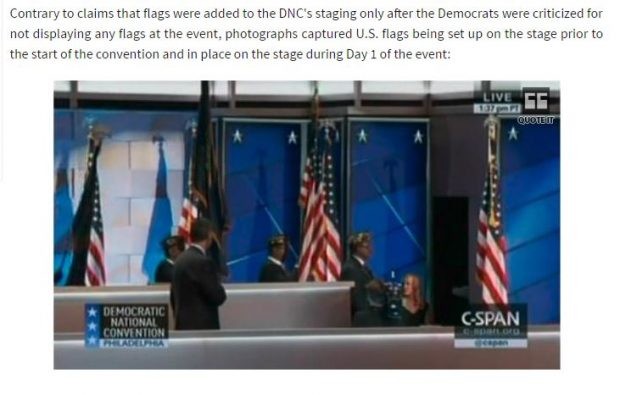 What’s worse, Snopes appears to have ripped that image from left-wing non-proft Media Matters’ coverage of the story. But even Media Matters — known for its misleading claims and hatchet jobs — didn’t claim that the screenshot came from Monday’s coverage. Apparently, it was too much for Evon to actually watch the convention on which he was presenting himself as the authoritative source.

Snopes also used the below Media Matters clip from Fox News as “proof” that flags were present on day one of the convention. But that video, like Snopes’ borrowed screenshot, came from day two of the convention. That clip, like the above image, confirmed TheDC’s report that the flags which were missing on day one were added to the stage for day two.

By press time, Snopes had not returned TheDC’s inquiries about their clear falsehoods.