Donald Trump saying “titties” as the Detroit Economic Club Monday is something of a moon landing.

It’s monumental. It’s maybe the greatest word that the GOP presidential nominee has uttered since starting his race for the White House. Hillary Clinton‘s “short-circuit” phrasing pales to ghostly white in comparison.

And many journalists are ignoring it. Or, ignoring tit as the case may be. (If you haven’t seen this yet, stop whatever you’re doing and watch here.)

As of 4 p.m. Breitbart News did not have the news on its site. But they shouldn’t feel too badly about protecting Daddy. Neither did The Washington Post, the New York Times, The Hill or Politico. The cable news networks — CNN and Fox News — have also not addressed it yet. MSNBC is off the hook with the Olympics in Rio. The sites that had it include HuffPost, New York Daily News, GQ, RedState, The Daily Caller, Mediaite and Mic, which stupidly questioned whether he had actually said “titties”:

RedState had a question:

A GQ writer wonders if he heard it correctly: 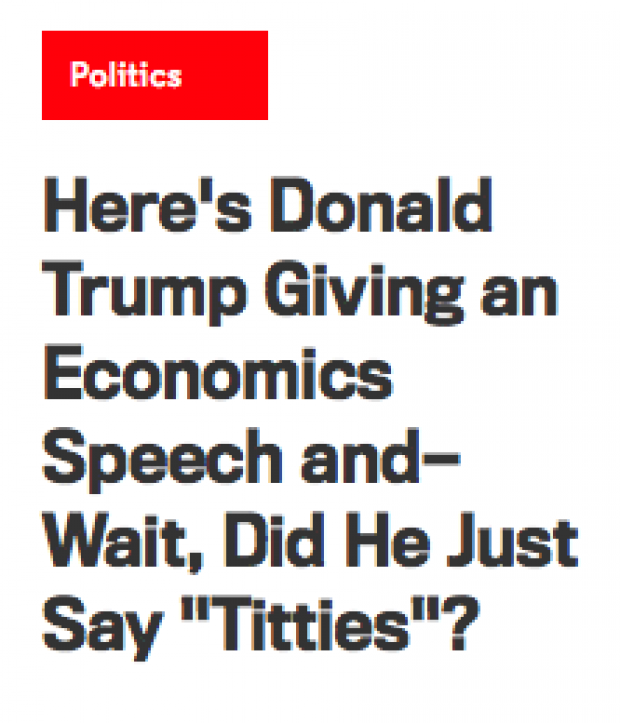 And HuffPost couldn’t let it pass:

“I just filed titties,” a reporter at The Daily Caller piped up at a news meeting this afternoon.

Here are some of the titty remarks making the rounds among journalists on Twitter:

GOP strategist Liz Mair (who recently called Trump a “loudmouth dick” on CNN): “If Trump were running on rebuilding titties, he’d probably stand a good chance of getting a lot of women voters to take a 2nd look.”

BuzzFeed‘s Andrew Kaczynski ran it as a Vine: “Look, the man said titties. There’s no way around it,” he announced on Twitter.

“Trump said ‘titties’ instead of “cities” because he was distracted by Ivanka.” — Harold Itzkowitz, VP of advertising at NationalMemo.

“Let me just say it’s wrong that everyone will spend so much time talking about the fact that Trump said ‘titties’ instead of ‘cities,'” remarked WaPo blogger Paul Waldman.

We interrupt this story to tell Waldman to go back to his cubicle and hide under his desk for the rest of the day.

“Detroit: The Titty That Doesn’t Sleep”

“Take Me Down To The Paradise Titty”

“We Built This Titty On Rock ‘n Roll”

“The Titty Of Brotherly Love”