Plain and simple: Anthony Weiner is still behaving like an embarrassing ass.

After a weekend of watching New York mayoral failure compare himself to a Mongoose with a new sexting partner, he’s now refusing to say whether he’s still engaging in the habit that destroyed his political career.

Let’s be clear. That new potential sexting partner was a dude who was trying to lure Weiner into an inappropriate chat. Which –let’s also be clear — wasn’t hard. 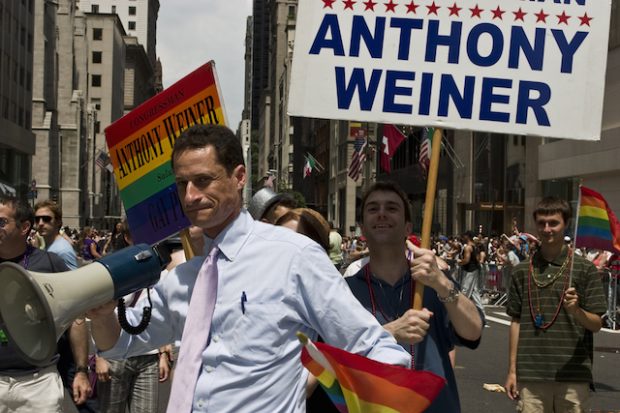 In an interview with New York Times Magazine’s Mark Leibovich, Weiner gabbed about what he’s doing with his life right now.

Answer: He doesn’t really have a job. He has clients who like to kibbutz.

Does anything hurt his feelings? He talks about his fucked up “emotional wiring” and says, “I have a very thick skin.”

Ew. Too much info Weiner. Please. Children may be reading this blog.

But his most ridiculous response arose from a question about whether he’s still sexting with women who are not his wife, Huma Abedin, one of Hillary Clinton‘s top aides.

“I’m not going to go down the path of talking about any of that,” Weiner said, practicing a discretion he has never known. “But I will say this: There’s no doubt that the Trump phenomenon has led a lot of people to say to me, “Boy, compared to inviting the Russians to come hack someone’s email, your thing seems almost quaint.”