Vanderbilt University has festooned its campus with professionally-designed posters which instruct students to use an exotic set of pronouns to refer to students and professors who refuse to admit they are either males or females.

The fancypants university’s “Faculty Senate Gender Inclusivity Task Force” created the posters (“with input from LGBTQI Life”). The posters are entitled — in huge font — “What Should I Call You?” 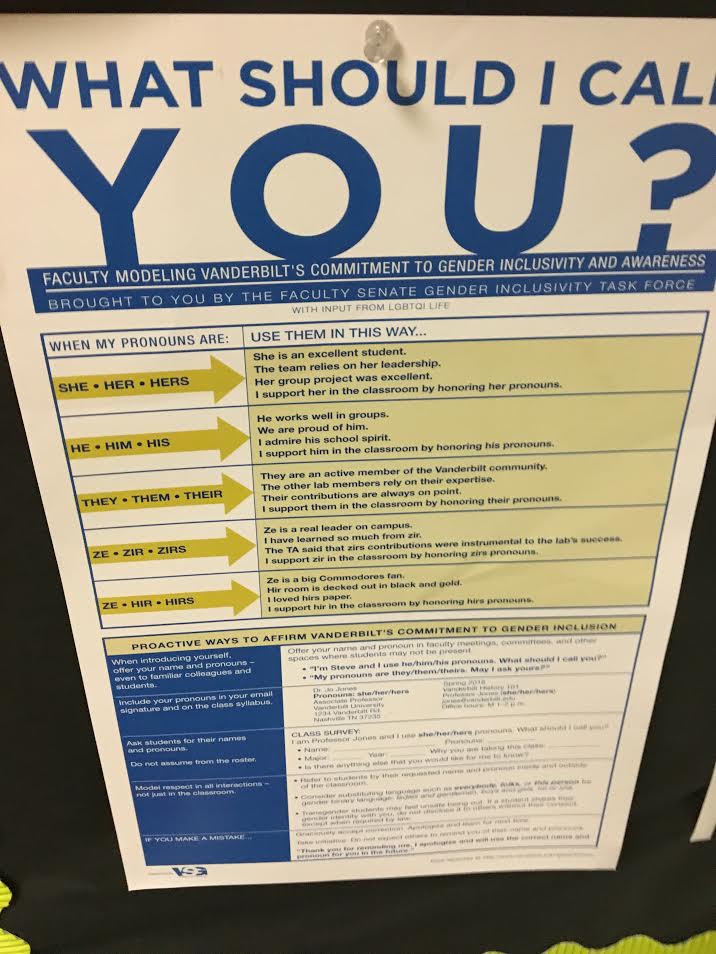 A full rendering of the posters is available here.

After a remedial lesson on how to use “they” pronouns, there is instruction for two exotic sets of pronouns: “ze, zir, zirs” and “ze, hir, hirs.”

The pronoun posters instruct students and professors to start introducing themselves with their “name and pronouns — even to familiar colleagues and students.”

For example, the posters advise that you might say — maybe at a football game or a sorority mixer: “I’m Steve and I use he/him/his pronouns. What should I call you?”

The posters also direct professors to advertise the pronouns they prefer at they very top of their syllabi, apparently in bold. For example: “Dr. Jo Jones, Pronouns: she/her/hers.”

The posters urge students not to worry if they make mistakes with the new pronoun regime. “Graciously accept correction,” it instructs. “Apologize and learn for next time.”

“Thank you for reminding me,” Vanderbilt students are now supposed to say. “I apologize and will use the correct pronoun for you in the future.”

It’s not clear how many of these pronoun posters are currently festooning the Vanderbilt campus. The poster pictured above appears in Carmichael Towers, a set of four identically hideous, 14-story brick boxes that look for all the world like public housing projects.

“Either a resident assistant or a school employee put it up,” the member of the Vanderbilt community who snapped the photo told The Daily Caller. “It has been there since the beginning of school.”

“There is a very strong liberal contingency on the campus that I am sure supports it,” the tipster also said. “The college may be in the South, but the student body is far left.”

Vanderbilt officials refused to answer virtually all questions about the posters.

“The poster, the result of a grassroots, student-led partnership with our faculty, is intended to provide awareness and education about gender identity,” Vanderbilt spokeswoman Princine Lewis told TheDC.

Lewis would not disclose who paid for the posters, or how many are hanging on campus or where they are hanging.

Vanderbilt officials also refused to disclose how much money was spent on the posters.

A single year of tuition, fees and room and board at Vanderbilt currently costs an exorbitant $60,572.

The ritzy school’s endowment of $4.1 billion equates to $595,670 per undergradaute student and is larger than the entire annual gross domestic product of Belize and Liberia — combined.

Vanderbilt has been a social justice cesspool in recent years.

In 2013, the august Southern school suspended the Alpha Tau Omega fraternity after a member sent an email to prospective pledges promising a “rape-free” event. The subtext of the ATO email referred to a rape scandal surrounding Vanderbilt’s perennially lousy football team. Two Vanderbilt football players have since been convicted for brutally raping a 21-year-old female student who had passed out in a dorm room. The case drags on for two remaining defendants allegedly involved in the rape. (RELATED: ‘Rape-Free’ Events Will Not Be Tolerated By Vanderbilt’s Administration)

Also last year, Muslims students at Vanderbilt organized a protest attempting to prevent Carol Swain, a conservative professor at the school, from writing about her view that American Muslim should assimilate into American culture. (RELATED: ‘Liberal,’ ‘Tolerant’ Vanderbilt Muslims Seek To Bully Black Professor Into Silence)

Last month, the fancypants school announced that it would be spending $1.2 million to take the word ‘Confederate’ off of a building. The building is named Confederate Memorial Hall.

Guides on “proper prounoun usage” are all the rage on college campuses this year. Officials at schools around the country are pushing students to swap out pronouns such as he, him and his for gender neutral prounouns such as “ve,” “ver” and “vis.” West Virginia University’s Title IX office recently warned students that referring to someone by the “wrong” gender pronoun is a violation of federal anti-discrimination law under Title IX. (RELATED: West Virginia University: Calling Someone The ‘Wrong’ Prounoun Is A Title IX Violation)