The San Francisco 49ers quarterback has faced plenty of backlash since he refused to stand for the national anthem before a preseason game, but the 62-year-old filmmaker has stood by him, explaining why in a lengthy Instagram post Tuesday.

“Free to express your opinion, no matter how unpopular it may be,” Moore captioned a photo of a Kaepernick T-shirt. “Brave enough to withstand the boos and the hate, because you know you are right, and soon others will join you because you are right.” (RELATED: Michael Moore Defends Ryan Lochte After He Loses $1 Million In Endorsement Deals) 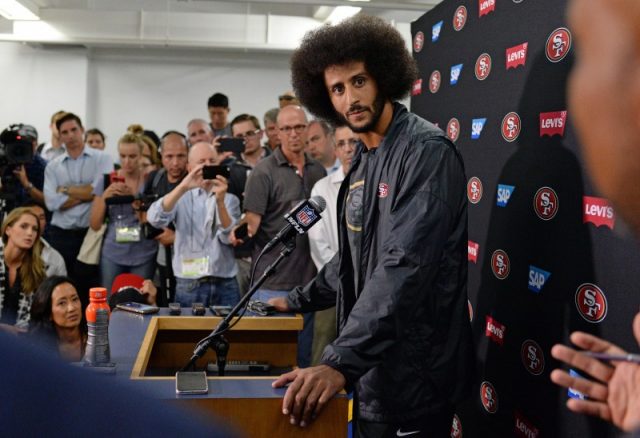 “I like the idea of kneeling down,” he added. “A moment of repenting for a nation gone awry. A moment to ask forgiveness for what has happened in our name. A show of respect for this ‘land we love.'”

“This protest will grow.”

“Read the third verse of the National Anthem, attacking the Brits for freeing ‘our’ slaves in the War of 1812, and promising those freed slaves an early ‘grave.’ A racist country from the get-go. Change the anthem to something by Hall and Oates or Coolio.” (RELATED: Michael Moore Gets SHUT DOWN For Making This Brash Assumption About Guns)