[dcquiz] “You are saying that if he [Kaepernick] chose to exercise his right as an American citizen you representing the United States would then turn around and punish him for the very rights this country has bestowed upon its citizens? If that’s not un-American I don’t know what is. So as far as I’m concerned the problem is not with Colin Kaepernick. It is with John Tortorella who should be stripped of his title as coach of Team USA unless he changes his stance,” Smith said Wednesday during ESPN’s show “First Take.” 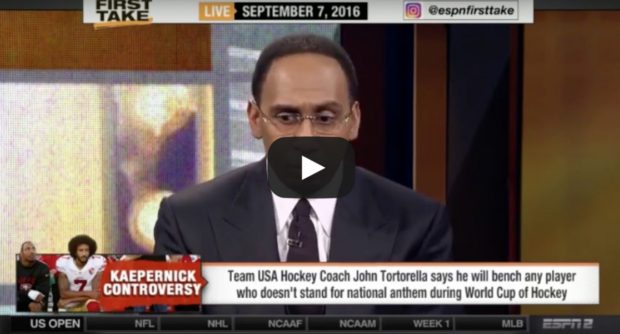 Tortorella told the media, “If any of my players sit on the bench for the national anthem, they will sit there the rest of the game.” (RELATED: Team USA Hockey Coach Says He Will Bench Any Player That Sits During National Anthem)

The outspoken hockey coach’s comments came in response to the San Francisco 49ers quarterback deciding to sit during the national anthem. His son is also an Army Ranger, so he’s certainly not playing games when it comes to respecting the flag and military.