There’s nothing more American than hot women at college football games, and I will defend to the death their right to dress however they want.

Huffington Post writer Rebecca Walden wrote a piece titled, “Young Ladies of the SEC, Cover it up!” The insane hit job on hot women has since been deleted, but can be found all over the web.

Walden wrote in part, “What we didn’t want, and what we never did, was to show up for a college football game looking like we belonged in a Victoria’s Secret fashion show.”

She couldn’t be further from the truth. I went to the prize of the Big Ten the University of Wisconsin where the beer flows freely, the parties are ample and the women are as good as it gets. In Wisconsin the beer is always cold and the weather is too for about nine months out of the year. Luckily, the three months where the sun is out the women are either bathing in the sun or at the football games wearing nothing but sports bras and red and white overalls. The Daily Beast named the Badgers of Wisconsin the hottest students in America and Fox News even had to investigate what makes Madison so sexy.

So as an alumni of the sexiest school in America (a ranking I almost certainly only hindered) I feel that I am uniquely qualified to drop some serious knowledge on pseudo-intellectual Walden. The Founding Fathers didn’t fight the British so that hot women could be oppressed, Americans didn’t storm the beaches of Normandy so cleavage could be banned, and we damn sure didn’t drop two atomic bombs on Japan in an attempt to control what hot women wear at sporting events. 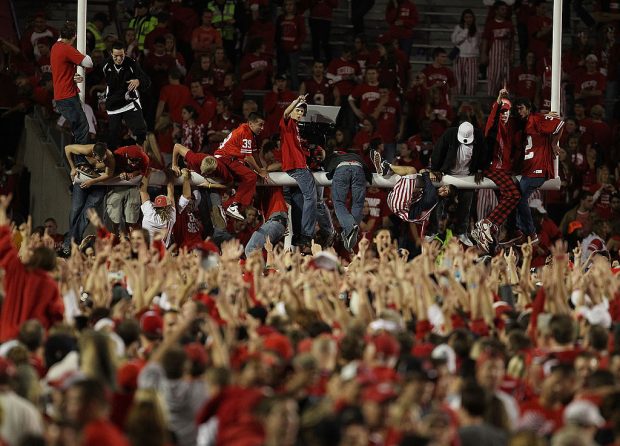 MADISON, WI – OCTOBER 16: Fans of the Wisconsin Badgers storm the field and climb the goal post after a win over the Ohio State Buckeyes at Camp Randall Stadium on October 16, 2010 in Madison, Wisconsin. Wisconsin defeated Ohio State 31-18. (Photo by Jonathan Daniel/Getty Images)

You know who else doesn’t think gorgeous women should be allowed to flaunt their bodies? Osama Bin Laden, ISIS, Al-Qaeda, Kim Jong-Un and the communists. That is the ideological camp that Rebecca Walden has decided to join. I will gladly join the side of brave Americans everywhere that fought for the right of smoke shows across America to wear as little clothing at football games as they’d like.

Now, I can’t speak for what the women of the SEC look like across the board. They might not have the sexiest school in America in the conference but it doesn’t take a genius to figure out that warm weather combined with women generally yields some favorable results.

It appears that we are at a crossroads in American history, and a line must be drawn in the sand. Either we stand with freedom and hot women or we banish them to the dustbin of history. I know where I stand and I will fight a hundred wars on a hundred different fronts to preserve a scorching hot woman’s right to go topless to a college football game if she wants. That’s just simply how much I love women.

Am I a hero for this brave stance? I suppose I’m not the one to say. That’s something the history books will have to determine.