The Alexandria City Council voted unanimously Saturday to remove a statue of a Confederate solider from historic Old Town, and to rename the Jefferson Davis Highway so it no longer honors the president of the Confederacy.

The Council needs permission from the Virginia Legislature to relocate the statue of a Confederate soldier, which stands facing south on a pedestal at Prince and Washington streets in Old Town, reports The Washington Post. After a long public hearing Saturday, the Council voted to seek that permission, as well as to rename the highway after seeking input from the community for a new name.

Virginia named the major north-south artery after the Confederate president in the 1930s, and the council changed the name of a stretch of road in Potomac Yards to match in 1952. The council also decided to consider renaming about 30 streets named after Confederate war heroes on a case by case basis.

The statue was the biggest sticking point for the community. If the Virginia legislature grants the city permission, the council wants to relocate the statue off the streets and into a local history museum. It’s located at the spot where a Confederate regiment retreated from the city in 1861. 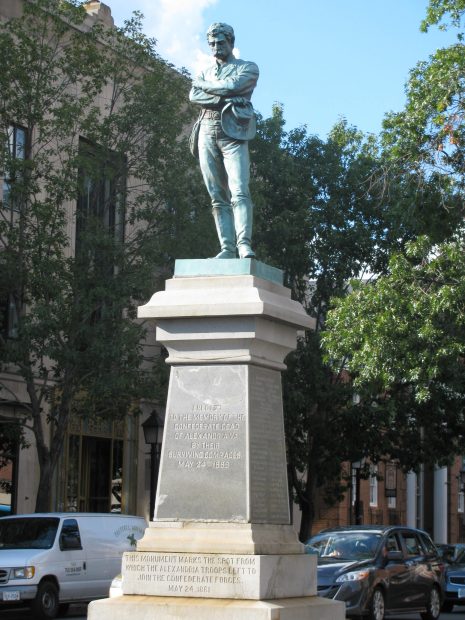 A task force set up by the council characterized the statue as “a sad and unarmed soldier, not a heroic figure,” reports The Washington Post. The task force recommended the city change the highway’s name, but leave the statue in place — with more context — and keep the rest of the street names as is unless people specifically petition to rename them.

Last year the city decided to stop the tradition of hanging three Confederate flags from traffic light poles near the statue on Confederate Memorial Day and on general Robert E. Lee’s birthday.