MANHATTAN, N.Y. – In the wake of an explosion in New York City’s Chelsea neighborhood, The Daily Caller News Foundation got close to the scene of the “intentional act,” which injured 29 people Saturday evening.

New York City was rocked by an explosion at 8:30 p.m. Saturday at 6th Avenue and 23rd Street, less than one week after the 15th anniversary of the September 11, 2001 terrorist attacks. The explosion, “was an intentional act,” said Mayor Bill de Blasio who stopped short of calling it terrorism. 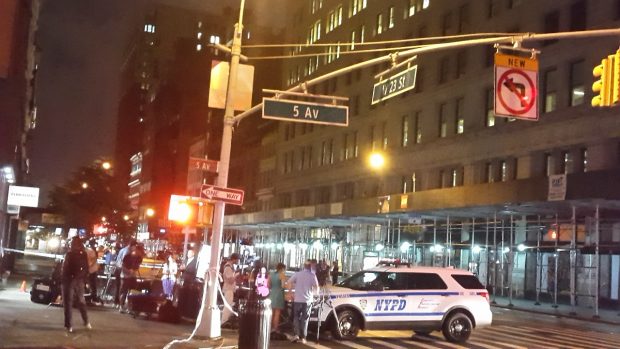 The corner of 5th Avenue and W 23rd Street in Manhattan’s Chelsea neighborhood in the early hours of September 18, 2016, after an explosion the night of September 17, 2016 that injured 29 people. Photo: J.P. Carroll/The Daily Caller News Foundation

“There’s no specific and credible threat against New York City at this time from any terror organization,” de Blasio told the media Saturday evening. It is believed that the explosive was located in or within the vicinity of a dumpster.

TheDCNF arrived on the scene at around 5:40 a.m. Sunday. The closest the media was allowed to get to the police perimeter set up around the blast site was the corner of 5th Avenue and W 23rd Street.

Just off of the corner of Broadway and 23rd Street in Manhattan’s Chelsea neighborhood in the early hours of September 18, 2016, after an explosion the night of September 17, 2016 that injured 29 people, several NYPD vehicles are parked as officers walk back to them. Photo: J.P. Carroll/The Daily Caller News Foundation

Joseph Graham lives within the police perimeter and was not allowed to return home when he spoke to TheDCNF.  “I was actually sleeping at the time, but I was just waking up and I heard this loud explosion and I said, ‘that sounded like a bomb,’ to myself.”

Despite thinking that a bomb had gone off, Graham had his doubts after he “listened some more to see if there was like, debris falling, or like, a building falling, or like, people screaming, and I didn’t hear any of that.” 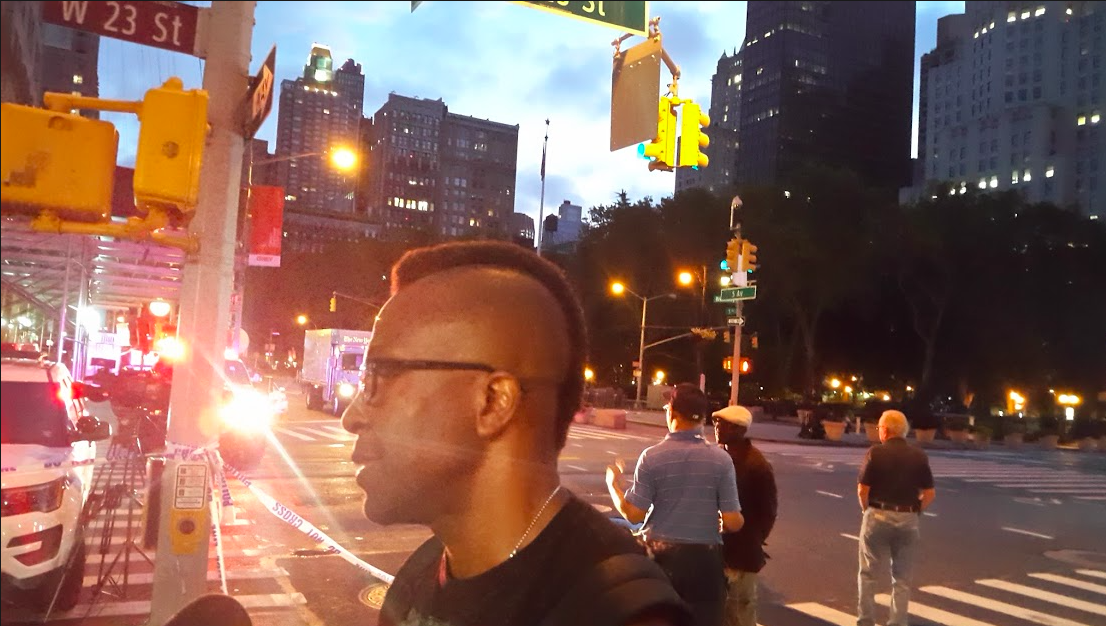 Ultimately the Chelsea-area resident, “figured it was some loud noise,” and therefore “didn’t pay it any mind.” After not finding much about the blast on the internet or television news, Graham decided to watch President “Barack Obama give a speech at the Congressional Black Caucus and that went on and there was nothing going on.”

It was only when friends started messaging him via text and Facebook that Graham realized something was amiss at “around 8:40[pm] or 8:45[pm], something like that.”

Graham then headed downstairs from his apartment where police told him to stay inside, at which point he went to the roof of his building and watched the scene below.

“Basically, I saw a lot of paramedics, police officers, I saw, by the building through the blind, the housing, there was, I guess debris that was more towards the street, because they said it was a dumpster so it looked more like, whatever blew, blew out towards the street,” Graham told TheDCNF.

Graham thought, “some idiot set off a bomb in a dumpster, it’s not really, it doesn’t scream terrorist, or ISIS, or anything like that.”

NYPD allowed entry into through W 24th Street later in the morning of September 18, 2016 after closing off access September 17, 2016 after an explosion in Chelsea injured 29 people. Photo: J.P. Carroll/The Daily Caller News Foundation

Despite a second device being found by the New York Police Department (NYPD) mere blocks from the explosion site, Graham believes that, “This cannot be terrorism, this is like, I mean, if you’re gonna be a terrorist, you’re gonna do something drastic.” He elaborated, “if something had happened at a subway station, where there was mass casualties or people were hurt, okay: now you’re talking. But a dumpster? Why would you put a bomb in a dumpster?” 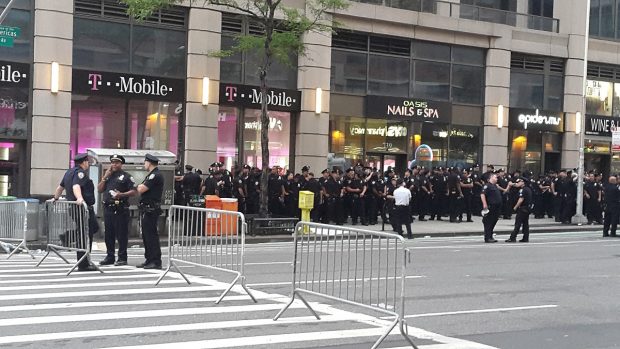 A woman who also heard the blast, but only spoke to TheDCNF on the condition of anonymity said, “I live on 24th Street and 8th Avenue and exactly at 8:30pm, [there was] a big blast.”  After staying in her apartment building throughout Saturday evening, the woman decided Sunday morning to “come out now because I wondering what happened to people, and so, I was very, very concerned and worried.”

The stunned lady said she’s unsure if the bombing was terrorist-related, “I don’t look until they investigate the whole thing because there are a lot of unusual people out on the street and we don’t know, sometimes they just do things. This was huge, it just wasn’t a little thing in a garbage can, we knew that.”