New information has emerged in the police shooting of Keith Lamont Scott that, if accurate, undercuts the prevailing narrative about the Charlotte man who was shot and killed by police.

The gun that police say the 43-year-old Scott had on him at the time of last Tuesday’s shooting was reportedly stolen in a residential burglary, news station WBTV reports.

As a felon, Scott, who was black, was legally prohibited from owning a firearm, much less a stolen one. Police also said that they observed Scott smoking marijuana in his vehicle and then wielding a gun outside of his apartment complex before he was approached by officers. 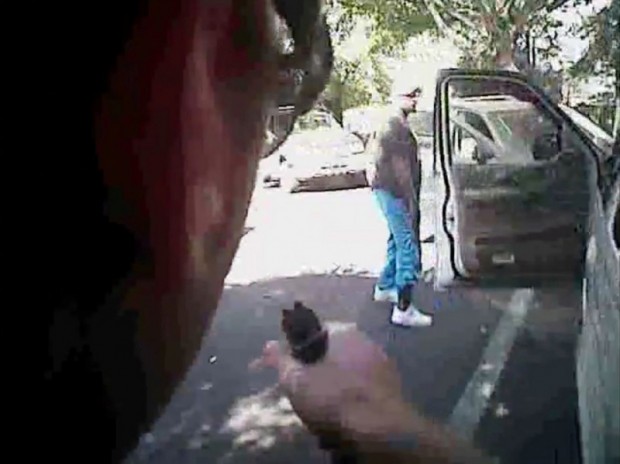 Keith Scott looks over to police with hands by his sides just before he was shot four times by Charlotte police in Charlotte, North Carolina, in this September 20, 2016 still image from video released by Charlotte police. (Charlotte-Mecklenburg Police Department/Handout via Reuters)

A third piece of evidence undercutting the narrative emerged Monday in the form of a restraining order that Scott’s wife, Rakeyia, filed on Oct. 5, 2015.

As the Independent Journal Review notes, the document shows that she told police that her husband owned a 9mm handgun and that he had threatened to kill her.

The retraining order, issued by a Gaston County district court judge, granted Rakeyia Scott a temporary restraining order that prohibited her husband from going near her and three of their children. Keith Scott was also ordered to hand over the 9mm he owned illegally.

Before filing the order, Rakeyia Scott said that her husband had kicked her, punched their 8-year-old son and threatened to shoot her.

“He said he is a ‘killer’ and we should know that,” a police report reads. She reversed course days later, saying that she did not need a restraining order because Scott was no longer a danger to her and their children.

Rakeyia Scott recorded video of her husband being shot. While the video does not show much of the shooting, Scott is heard telling officers that her husband did not have a firearm. She also yelled to police that he suffered from a traumatic brain injury. Scott sustained the injury in a 2015 motorcycle accident. 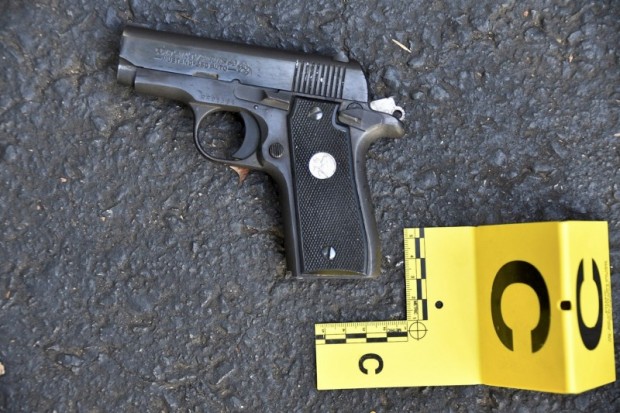 WBTV reported on Monday that police sources said that the gun Scott is said to have had on him was recently stolen in a burglary.

According to WTVD, the burglar told Bureau of Alcohol, Tobacco, Firearms and Explosives agents that he sold the gun to Scott. It is unclear when the burglary and the transaction are believed to have taken place.

The revelations are in stark contrast to the initial reports about the shooting.

Just after the incident, Scott’s family claimed that he was shot without justification and that he was in possession of a book, not a gun.

Those claims led to anger that helped fuel riots in Charlotte. Dozens of police officers were injured during the riots. Businesses were looted. One man was fatally shot by another man during one night of violence. The Justice Department also began investigating the police shooting.

But details about the incident, and about Scott’s violent past, trickled out over the course of the past week.

In 2005, he was sentenced to seven years in prison after being convicted of aggravated assault with a deadly weapon following an incident in San Antonio, Texas, Scott fired 10 rounds from a 9mm, injuring a man. The charges were compounded after Scott attempted to evade arrest. He was released in 2011.

Police critics initially asserted that Scott did not have a firearm on him at the time of the shooting. Speculation even swirled at progressive news outlets like MSNBC that the gun, which was seen in one photo taken at the time of the incident, had been planted by police. (RELATED: MSNBC Pushes Narrative That Police May Have Planted Gun On Keith Lamont Scott)

But police officials said that a loaded gun was recovered and that it had Scott’s fingerprints and DNA on it.

Even after it became more likely that Scott possessed a gun, critics lamented that officers should not have instigated the incident just because Scott was seen with marijuana.

But if police officers’ version of events are accurate — and they are still being reviewed — Scott was confronted only after he was seen with a gun, not because he was spotted with marijuana.

Police officers parked in an unmarked vehicle outside of Scott’s apartment complex while waiting to serve a warrant on another individual. Scott pulled up in his vehicle and then began to roll a marijuana “blunt.”

“Officers did not consider Mr. Scott’s drug activity to be a priority at the time and they resumed the warrant operation,” a press release from the Charlotte-Mecklenburg police department states. “A short time later, Officer Vinson observed Mr. Scott hold a gun up.”

[dcquiz] The statement claims that officers then decided to take action against Scott.

“Officers departed the immediate area to outfit themselves with marked duty vests and equipment that would clearly identify them as police officers,” the statement reads.

Scott’s gun was spotted a second time. Officers ordered Scott to exit the vehicle. He initially refused to do so, but after finally exiting, he refused orders to drop the gun. That’s when Vinson fired several fatal rounds.

Charlotte police chief Kerr Putney said that Vinson will not be charged in the incident.