Donna Brazile, the current head of the Democratic National Committee, appears to have tipped the Clinton campaign off to a question about the death penalty that was going to be asked during a CNN town hall in March, newly released emails show.

“From time to time I get the questions in advance,” Brazile wrote in an email to Clinton campaign communications director Jennifer Palmieri on March 12.

Brazile, who was a CNN contributor at the time of the email, went on to ask Palmieri about Clinton’s stance on the death penalty.

“Here’s one that worries me about HRC,” wrote Brazile in the email, which was released on Tuesday by Wikileaks. The emails come from the Gmail account of Clinton campaign chairman John Podesta. 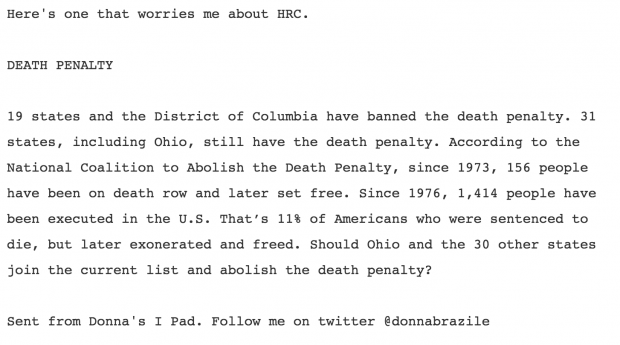 “Yes, it is one she gets asked about,” Palmieri responded. “Not everyone likes her answer but can share it. Betsaida – can you send her answer on death penalty?”

Clinton was indeed asked about her stance on the death penalty during a CNN-hosted town hall the next day in Columbus, Ohio.

Ricky Jackson, a former death row inmate who was exonerated after serving 39 years in an Ohio prison, asked Clinton the question.

“I would breathe a sigh of relief if either the courts or the states themselves began to eliminate the death penalty,” Clinton told Jackson.

“What happened to you is a travesty and I can’t even imagine what you went through and how terrible those days and nights must have been for all those years,” she continued.

The revelation of Brazile’s help for Clinton is ironic given the circumstances by which she came to be interim head of the DNC. She took the position in July after DNC emails released by Wikileaks that month showed that then-chair Debbie Wasserman Schultz was highly critical of Clinton’s primary opponent, Bernie Sanders.

The email also undercuts Brazile’s claim throughout the primaries that she was a neutral commentator regarding Clinton and Sanders.

Brazile did not issue an endorsement until June 7, when Clinton routed Sanders in California.

“I’ve maintained my neutrality, and that’s very important to me as an officer, but I want to say how incredibly important his campaign, I think, has been this entire political season,” she said at the time.

The Washington Post was convinced that Brazile was neutral. After Brazile took over as interim head of the DNC, The Post’s Callum Borchers wrote:

While Wasserman Schultz was constantly accused by the Sanders campaign of harboring a pro-Clinton bias, Brazile, a regular presence on CNN during coverage of debates and state primaries, consistently provided impartial analysis.

“If Democrats were looking for a leader with a proven ability to speak glowingly about their presumptive nominee without disparaging their runner-up, Brazile — a superdelegate who kept her preference to herself — was a logical pick,” Borchers added.

Brazile, a longtime party consultant, responded to The Daily Caller’s request for comment.

“What a stretch,” she wrote, adding that she was forwarding the request to the DNC.

She issued a longer statement later on Tuesday.

“As a longtime political activist with deep ties to our party, I supported all of our candidates for president. I often shared my thoughts with each and every campaign, and any suggestions that indicate otherwise are simply untrue,” Brazile said in a statement issued through the DNC.

Regarding the CNN town hall, Brazile said “I never had access to questions and would never have shared them with the candidates if I did.”

Brazile went on to blast Wikileaks, accusing the site of being linked to the Russian government. She did not offer an explanation in her statement for why her email to Palmieri, sent a day before the town hall, referred to questions that were asked in the town hall.

“To be perfectly clear, we have never, ever given a town hall question to anyone beforehand,” she told TheDC.

Business Insider is reporting that a Democratic party official says that Brazile’s email was not based on a CNN town hall question. Instead, the official claims that the question was for a panel Brazile was set to appear on.

But Mediaite notes that the question asked by town hall co-host Roland Martin was very similar to the message Brazile sent to Palmieri.

“Secretary Clinton, since 1976, we have executed 1,414 people in this country. Since 1973, 156 who were convicted have been exonerated from the death row. This gentleman here is one of them,” Martin said in his introduction of Jackson, citing statistics that were included in the same email Brazile sent to the campaign.

CNN’s Brian Stelter reported later Tuesday that when Martin, a host on TV One, was asked whether he or someone from his staff provided town hall questions to Brazile, he did not deny it.

“My questions were shared with my executive producer and several members of my TV One team,” Martin told Stelter. He did not respond to the follow-up question of whether he could rule out that the questions were sent to Brazile.

For her part, Brazile denied to Stelter that she “had no access to any questions.”

This post has been updated with comments from Brazile and CNN.