Summer Zervos, the former Apprentice star who alleges she was sexually assaulted by Donald Trump, sent an email to Trump’s assistant in April praising the GOP nominee.

The email and a statement by Zervos’ cousin were released by the Trump campaign Friday afternoon. (RELATED: There’s A New Sexual Assault Allegation Against Donald Trump)

[dcquiz] “I am completely shocked and bewildered by my cousin, Summer Zervos, and her press conference today. Ever since she was on The Apprentice she has had nothing but glowing things to say about Mr. Trump,” John Barry, Zervos’ first cousin, said in the statement. He went on to say, “That was until Summer invited Mr. Trump to her restaurant during the primary and he said no. I think Summer wishes she could still be on reality TV, and in an effort to get that back she’s saying all of these negative things about Mr. Trump.”

In 2006, Zervos said in an interview that she left the Apprentice “admiring Donald Trump a lot more than when I arrived.”

“I am in a unique situation being that I am the only former Apprentice who operates a business where Mr. Trump’s supporters can walk in, express their admiration for him and inquire about my experience. Mr. Trump has a great deal of support in Huntington Beach, Ca!”

“We hire a diverse crew and embrace anyone who is honest while working hard. Mr. Trump is cut from the same cloth. I would greatly appreciate reconnecting at this time. He will know my intentions are genuine,” Zervos said. 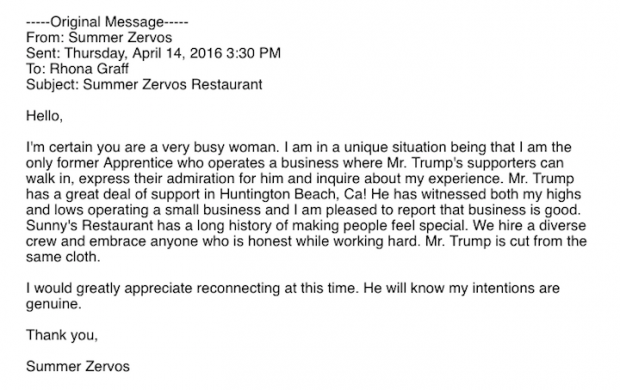 At the press conference Friday alongside famed attorney Gloria Allred, Zervos acknowledged sending the email to Trump’s assistant in April.

“I contacted his secretary in April, 2016 and asked if I could reconnect with Mr. Trump. I didn’t not tell her why I wanted to speak with him,” Zervos said. The former Apprentice contestant continued to say she got a response that the campaign would follow up with her.

Zervos then said that she sent an unreleased email on April 21, 2016 to Trump’s assistant, which she asked to be forwarded directly to Trump. She said that in the e-mail she wrote, “I have been incredibly hurt by our previous interaction.” Zervos said she got no response by Trump to this email.

Allred responded to the email released by the Trump campaign and Barry’s statement Saturday morning. She pointed to a friend of Summer’s who corroborates that Zervos has told people about what she alleges Trump did.

Allred also added, “John Barry is a huge Trump supporter. He was employed at Summer’s family restaurant until several months ago when his employment ended. Since then he has expressed hostility and ill will towards Summer.”