“Climate change is real, it’s urgent, and America can take the lead in the world in addressing it,” Hillary Clinton told her mostly young audience in a panicky speech at a rally at Miami-Dade College in Miami, FL, October 11.

Indeed, she said, “We need a President who believes in science and who has a plan to lead America in facing this threat and creating good jobs, and yes, saving our planet.”

Clinton might want to learn a bit of climate science. She could start with temperature trends.

The world warmed by perhaps 0.8–1.0˚C in the last 150 years, but that doesn’t mean human CO2 and other “greenhouse gas” emissions caused the warming. Why?

First, because the first hundred years of warming occurred before CO2 levels rose enough to blame.

Second, because even the U.N. Intergovernmental Panel on Climate Change (IPCC) acknowledges the warming was intermittent, not steady (like the rise in CO2), and two periods (1860–1880 and 1910–1940) before CO2 rose enough to matter were as rapid as the one period (1980–2005) afterward, as shown in this graph exposing the statistical deceptions of the IPCC. (The IPCC provided the red, purple, and orange trend lines to depict accelerating warming periods over time; the yellow lines show that the warming occurred at the same rate in three periods, with cooling or stasis interspersed.) 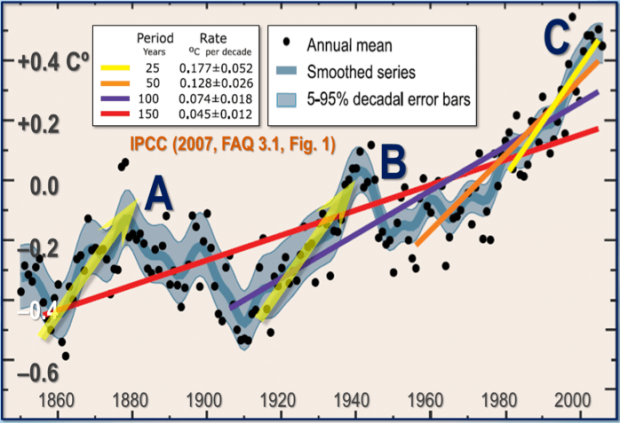 Third, because once you’ve applied the proper statistical tools to control for the normal fluctuations of Earth’s climate system to global temperature data, you find that the entire global temperature change in 1958 to 2012 occurred in a single step, in late 1977. It was driven not by CO2 but by the reversal of the Pacific Decadal Oscillation from negative (cooling the atmosphere) to positive (warming it).

Fourth, because aside from a temporary upward blip (1998) making it fractions of a degree warmer than the surrounding decades and driven by an unusually strong El Niño (which warms the atmosphere and is usually followed by a cooling La Niña), there was no statistically significant trend in global average temperature from early 1997 to late 2015, despite the fact that CO2 concentration rose even faster than alarmists had predicted. (The celebrated warmth of 2016 is analogous to that of 1998—driven by El Niño, not CO2.)

And the warming isn’t dangerous. Most of it delivered us from the ravages of the Little Ice Age (~1350–1850) and its widespread crop failures, famines, and plagues.

Besides, a change of global average temperature of about 1˚C is innocuous. The difference between low and high temperatures every day in most locations is ten to thirty times that much, and twenty to eighty times that much between mid-summer and mid-winter. The proper response is, as veteran MIT climatologist Dr. Richard Lindzen puts it, “So what?”

Clinton might also want to learn about the difference between model predictions and real-world observations.

Climate alarmists depend on model predictions for their fear mongering. But those aren’t evidence. They’re what we expect if our theory about climate is true. As such, they must be tested against real-world observations, and they don’t fare well.

First, on average, they predict two to three times the warming observed over the relevant period. 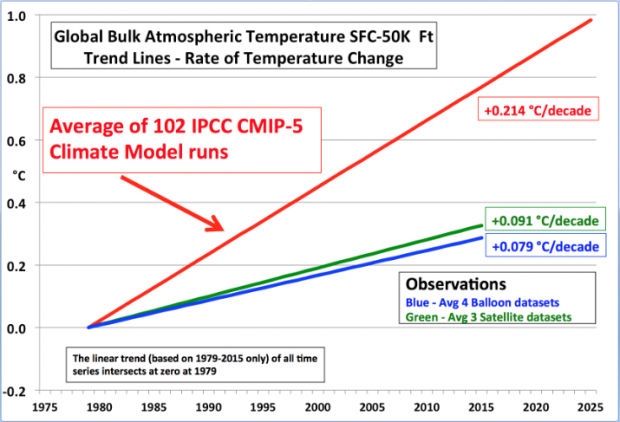 Second, over 95 percent predict more warming than observed. If their errors were random, they’d be as frequently below as above observations. That they’re not implies that the errors are driven by bias.

Third, none predicted the absence of warming from early 1997 to late 2015—eighteen years and nine months, too long to reconcile with the models.

In short, real-world observation contradicts model output. That means the models are wrong and provide no rational basis for any predictions about global temperature or any policy.

So there’s no good reason (other than lining the pockets of the renewable-energy moguls who support her) for Clinton’s passion to:

What Clinton wants to do to fight global warming would, as climatologist Dr. David Legates and energy economist Dr. G. Cornelis van Kooten showed in a paper published by The Cornwall Alliance for the Stewardship of Creation, slow, stop, or reverse economic growth everywhere by depriving people of abundant, affordable, reliable energy from fossil fuels. It would delay for billions of the world’s poor the conquest of extreme poverty and the high rates of disease and premature death that invariably accompany it. That is morally unconscionable.

E. Calvin Beisner, Ph.D., is Founder and National Spokesman of The Cornwall Alliance for the Stewardship of Creation, a network of over 60 scholars—scientists, economists, and theologians—educating for Biblical earth stewardship, economic development for the poor, and the gospel of Jesus Christ.