Cryptographic signatures demonstrate that Democratic National Committee Chairman Donna Brazile is wrong when she suggests the WikiLeaks emails were altered and that she did not send an email tipping off Democratic presidential nominee Hillary Clinton to debate questions.

Many email systems use a verification system called DomainKeys Identified Mail (DKIM) that shows whether an email has been changed. It uses a key stored on the email server that sent the email, so it can’t be forged.

HillaryClinton.com uses Gmail to handle its mail and uses DKIM. Staffer Jennifer Palmieri, using her HillaryClinton.com email, replied to a Brazile email warning that Brazile was “worried” about Clinton’s ability to answer a question about the death penalty, that she said would be asked at an upcoming debate. She copied Podesta — who also uses Gmail — presumably so that he could encourage Clinton to prepare for the question.

The emails were hacked from Podesta’s account by WikiLeaks, but Clinton’s campaign — and Brazile — have all but claimed their contents have been falsified.

But a check of the DKIM signature by the Daily Caller News Foundation against HillaryClinton.com’s key shows that Palmieri did, in fact, send the exact email to Podesta that WikiLeaks says she did.

The email from Brazile had a subject line of “From time to time I get the questions in advance” and said “Here’s one that worries me about HRC,” followed by the full text of a question about the death penalty.

Clinton was indeed asked the question at a debate by moderator Roland Martin.

Brazile claimed the emails were “doctored” by “Russian sources” and that she wouldn’t share debate questions with candidates ahead of time. Brazile became Democratic National Committee Chairman after her predecessor, Debbie Wasserman Schultz, resigned amid accusations that she was helping Clinton over rival Sen. Bernie Sanders in the primaries.

When Fox News’ Megyn Kelly asked Brazile about the impropriety of sharing debate questions in advance with candidates, Brazile claimed she was being “persecuted” by the question.

Brazile then called Daily Caller reporter Chuck Ross “so unprofessional” for asking for evidence that the email wasn’t real. Unfortunately for Brazile, she does not understand DKIM.

TheDCNF ran code to confirm that the email was valid as provided by WikiLeaks — the only way it could be false is if Palmieri herself changed the body of Brazile’s email before replying to it and copying Podesta.

TheDCNF downloaded the raw source of the email here: https://wikileaks.org/podesta-emails/emailid/5205

Then ran the following code in Python:

The “True” means the email was not tampered with. 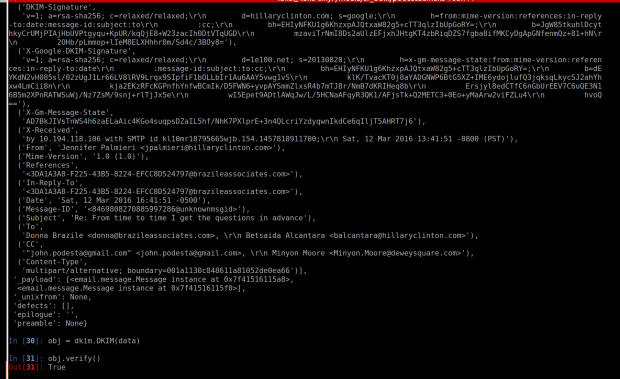