“Btw you know as well as I every god damn cabinet officer and WH staff uses [their] gmail account!” Tom Nides, the former deputy secretary of state for management and resources, wrote to John Podesta in a March 2015 email.

Nides, who served in the State Department from 2011 to 2013 while Clinton was secretary of state, wrote to Podesta using his Gmail account, and suggested that he used one while working in the Obama administration.

Podesta’s Gmail account, which he used to communicate with White House staffers, got hacked, revealing Nides’ candid email to the Clinton campaign chairman. 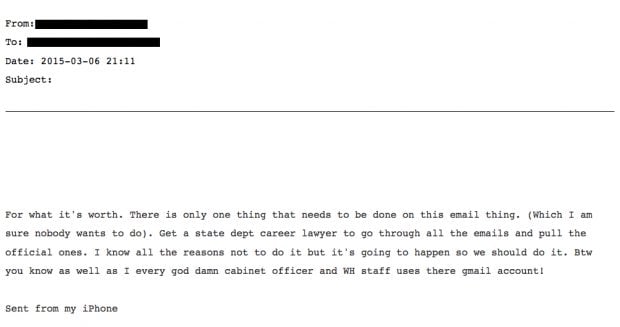 Clinton is probably the most high profile case of an Obama administration official not only using a private email account, but also relying on a completely private server based out of her home in Chappaqua, N.Y.

“For what it’s worth. There is only one thing that needs to be done on this email thing. (Which I am sure nobody wants to do). Get a state dept career lawyer to go through all the emails and pull the official ones. I know all the reasons not to do it but it’s going to happen so we should do it,” he wrote to Podesta.