According to its “About” page, NPR “presents fact-based, independent journalism that examines and airs diverse perspectives.”

No, actually, it doesn’t. NPR has long since abandoned its commitment to provide unbiased news, and instead consistently promotes the left’s agenda at every turn with misdirection and misinformation.

Chace skeptically mentions Branstner’s claim that each refugee costs taxpayers $14,000. Citing an incorrect source she states flatly that the study “has been discredited.” The statistic comes directly from the Organization for Economic Cooperation and Development, which estimates the first year federal resettlement cost at $14,708. OECD notes that this excludes all state and local costs, which are significant. In fact, Middle Eastern refugees cost an average $64,370 in the first five years, or $257,481 per household.

She summarizes Branstner’s concerns about costs, assimilation, the resettlement program’s secrecy, and the tendency for Muslims to dominate as their population grows. All of these concerns are justified but she casually dismisses them. “I want to say clearly here, the overall message of Ron Branstner’s presentation is not true.”

She claims that “St. Cloud taxpayers are not getting screwed by this program.” Wrong again. All taxpayers shoulder that $14,708, but burdens on communities can be overwhelming. Here are a few examples:

Furthermore, refugees use welfare at excessive rates for many years (see table). Those who start successful businesses are a tiny minority. The average wage of refugee employees was $9.59 in 2014, the most recent data available, and similar in prior years. At this rate, most refugees will pay no taxes. Instead they will receive an Earned Income Tax Credit refund. 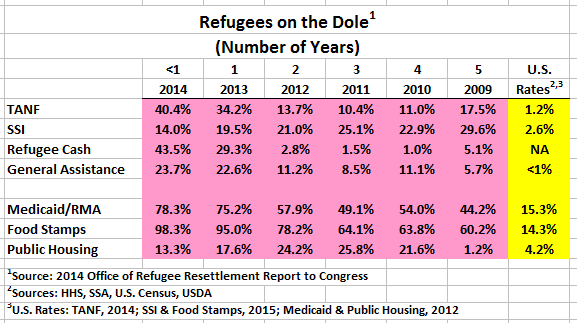 Next, the reporter attempts to characterize Branstner’s presentation as part of a nationwide conspiracy. The reporter claims, “There is a national movement of people repeating these things all over the country and they’re all saying the same thing. They all feed off each other.”

She identifies ACT! For America, Brigitte Gabriel’s group, and DC-based Center for Security Policy, falsely claiming that ACT! “coordinates much of its activity” with CSP. She concludes, “And then there you are. You have a connection to speakers and tactics and talking points. It’s this interconnected web of misinformation.”

Facts are stubborn things, as John Adams said. People who rely on them tend to repeat them to others. This is how most of us learn. We read carefully sourced, factual articles that make a convincing case. Once a fact is established, it is only natural that others interested in the same issue will repeat it. So, yes, many times we do all say the same thing, because it is the correct thing.

It is typical for a leftist reporter to breathlessly call it “conspiracy” whenever the story involves people they disagree with, but just try to accuse the national news media – which unethically does regularly coordinate – of a similar conspiracy, and it is laughed off as “conspiracy theory.”

Unfortunately for the left, our accurate reporting restrains their effort to dominate the narrative and advance their agenda. So they resort to the hackneyed “xenophobe,” “hater” meme.

The reporter says “The Southern Poverty Law Center now classifies both [ACT! and CSP] as ‘hate groups.'” But since when is the SPLC an expert? The SPLC is nothing more than a professional defamation shop whose principals have made themselves rich terrorizing liberals into supporting them. That according to co-founder Morris Dees’ former business partner, who said:

Morris and I, from the first day of our partnership, shared the overriding purpose of making a pile of money. We were not particular about how we did it; we just wanted to be independently rich. During the eight years we worked together, we never wavered in that resolve.

The reporter identifies Refugee Resettlement Watch and Creeping Sharia as “being informed by” ACT! and CSP. Neither is true. RRW has been reporting independently on the refugee resettlement program since 2007. It answers to no one. It’s author, Ann Corcoran, wrote Refugee Resettlement and the Hijra to America, a best seller at Amazon. CSP published it in recognition of Ann’s expertise on the subject. Chace should read it.

Chace’s report plays a segment of a Trump speech citing a CSP poll‘s finding that 25 percent of Muslims living in American believed shariah is “the Muslim god Allah’s law that Muslims must follow and impose worldwide via jihad”…  Trump also quoted another CSP poll which found 51 percent of Muslims agreed that “Muslims in America should have the choice of being governed according to shariah.”

The reporter then says, “These poll numbers have been discredited.” By whom? When? Offering no credible sources, we are supposed to just take her word for it. But the poll is accurate. And there are others that back it up. Even a Pew poll finds that in most countries around the world, a majority of Muslims believe in shariah law.

We all know that most NPR funding comes from private sources, but we need to seriously consider zeroing out the approximately 16 percent that comes from taxpayers. Perhaps the program would then get the message, or if not, would at least be required to raise all the money needed to push its left-wing agenda.