The Facebook page “Michell Obama for 2020” posted a video of a woman shaming a young boy — presumed to be her son — and kicking him out of the house for voting for Donald Trump in his elementary school’s mock election.

The video opens with the young boy crying while his mother yells at him, “since you voted for Donald Trump, you can get your shit and get out.”

“Get your sign, so when the people see you outside, they know why you’re standing out there,” she added.

The sign — pictured below — reads “my mom kicked me out because I voted for Donald Trump.” 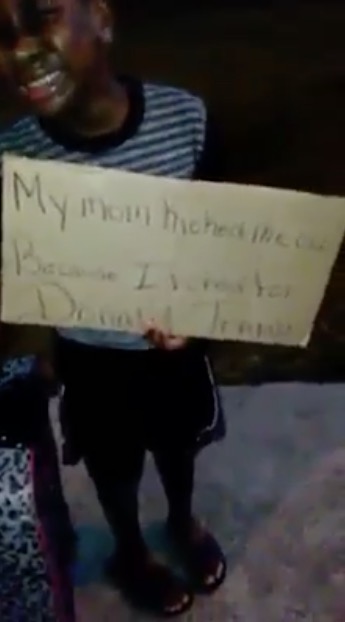 “Here’s your suitcase. Bye,” she adds before pushing him out the door and closing it in his face. “Go. We don’t do Donald Trump here.”

The woman eventually follows the young boy out of the house.

She asks the boy, “why did you vote for him at school?”

The boy answered that he saw Trump “on TV a lot,” to which the woman responds, “well I hope you find a new TV because this [outside] is going to be your new home. You can’t come back here.”

The video closes with the woman leaving the boy in the street as she and a second, crying boy — assumed to be a younger brother — head back toward the house.