The shocking report from The Sacramento Bee on Tuesday shows that national anthem hating quarterback never registered for a single election since turning 18 in 2004. Kaepernick initially just claimed he didn’t vote in the 2016 presidential election, but now it’s clear he’s made absolutely no effort to ever vote. (SLIDESHOW: These Gorgeous Patriots Love The American Flag) 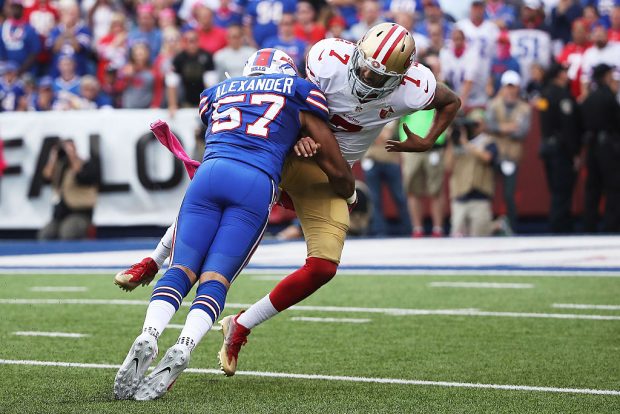 BUFFALO, NY – OCTOBER 16: Lorenzo Alexander #57 of the Buffalo Bills sacks Colin Kaepernick #7 of the San Francisco 49ers during the second half at New Era Field on October 16, 2016 in Buffalo, New York. (Photo by Tom Szczerbowski/Getty Images)

The new revelation is surprising given the fact that Kaepernick has dominated headlines for the 2016 season over his refusal to stand for national anthem because he believes minorities are oppressed. (SLIDESHOW: This Supermodel Might Be The Sexiest NFL Girlfriend)

It looks like Kaepernick spends election day the same place he spent the opening part of the season: on the bench.