Julia Ioffe, a former contributing writer for Politico Magazine who will be joining The Atlantic as a reporter in January, suggested Wednesday on Twitter that President-elect Donald Trump is having sex with his daughter Ivanka.

Politico told The Daily Caller that the tweet accelerated the timeline of her departure, and that Ioffe is no longer with the publication, effective “immediately.”

“This tweet is completely unacceptable and is an obvious violation of POLITICO standards,” a Politico source told TheDC. “Julia Ioffe is no longer with the publication.”

Ioffe tweeted out a link of a news report saying Ivanka will be using office space in the White House typically reserved for the first lady and commented, “Either Trump is fucking his daughter or he’s shirking nepotism laws. Which is worse?”

Ioffe subsequently tweeted, “We have a president-elect who popularized ‘saying what everyone is thinking,’ but I guess my phrasing should’ve been more delicate.”

She then said, “I take back what I said about Ivanka and just let her father, our president, speak for me.”

This tweet included a video of Trump saying, “If Ivanka weren’t my daughter perhaps I would be dating her.” 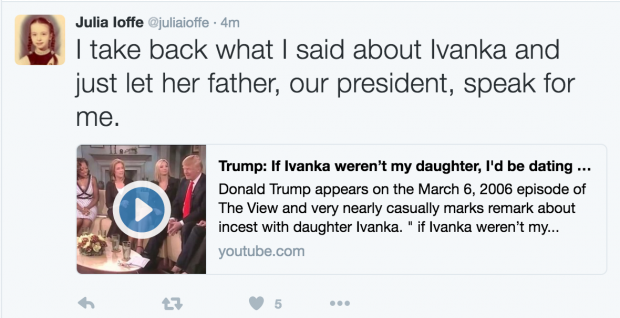 The Atlantic announced last week that Ioffe will be joining the publication in January as a foreign policy and U.S. politics reporter. The Atlantic said of the tweet in a press statement that Ioffe made a mistake, “which she regrets and for which she publicly apologized,” but was confident she would adhere to the magazine’s standards when she joins next month.

The Daily Caller reached out to Ioffe about the tweet and she said she has no comment and hung up.

Ioffe was previously in the news for a tiff with Melania Trump. The Politico writer faced a barrage of anti-Semitic tweets in April after posting a negative profile of Melania. The incoming first lady responded to the incident by saying Ioffe could have “provoked” the tweets.