Two investigations involving minority women who accused Donald Trump supporters of attacking them last month — one in California and another in Oregon — have stalled because of lack of cooperation or lack of evidence, investigators tell The Daily Caller.

The investigations stem from incidents that allegedly occurred at San Diego State University and in Hillsboro, Ore. in the days after Trump was elected president.

At San Diego State, a Muslim student claimed that on the day after Trump’s victory, two men stole her purse and car keys while making pro-Trump statements. She later reported her vehicle stolen.

Also on Nov. 9, Kara Stevens, a 28-year-old black woman from Beaverton, claimed that two white men attacked her with a brick and threatened to rape her and lynch her in a supermarket parking lot. She claims that the assailants made pro-Trump remarks and were driving a vehicle with a Trump bumper sticker on it.

The incidents were reported nationally along with numerous other stories of Trump supporters allegedly attacking minorities after the election.

But one problem has emerged: many of the cases have been found to have been fabricated. Most of the hoaxes have come from Muslim women claiming that Trump supporters tried to remove their hijabs. Muslim students at the University of Louisiana, Lafayette, the University of Michigan and Baruch College all falsely claimed that Trump supporters accosted them because they were wearing hijabs. 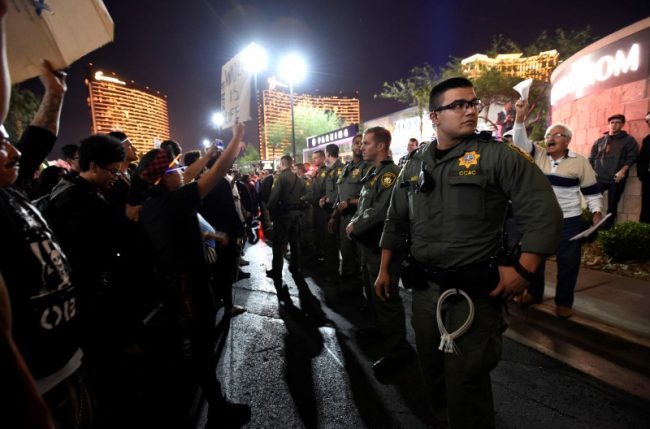 Las Vegas police stand between protesters against and supporters of the election of Republican Donald Trump as President of the United States, near the Trump International Hotel & Tower in Las Vegas, Nevada, November12, 2016. REUTERS/David Becker

Police at San Diego State and in Hillsboro have not determined that the cases there are also hoaxes. But they say they have not yet seen any evidence — no witnesses and no video footage — that the incidents occurred. Because of that and a lack of evidence, the probes have been suspended.

A spokesman for the SDSU police department says that the Muslim woman who filed the complaint about being robbed by Trump supporters informed investigators this week that she no longer wants to pursue prosecution of the case.

“The victim in this case you are referring to decided she no longer wanted to pursue the matter criminally. This decision just occurred this week,” Lt. Greg Noll told TheDC.

He also said that the woman’s claim that her vehicle was stolen was “unfounded as the victim forgot where she parked her vehicle.”

Aisha Sharif, a friend of the woman’s, told the school’s newspaper last month that her friend’s attackers made pro-Trump comments and targeted her because she was wearing traditional Muslim attire.

“They said something along the lines of ‘now that Trump is president, get ready to start packing up and flee,'” Sharif told The Daily Aztec, the school’s newspaper. “She had her keys in her hand, and they just took her keys and took her car.”

“I think this absolutely relates with (Trump winning). It’s sad that it’s only- hasn’t even been 24 hours since he’s been elected and we’re already getting this type of hate,” Sharif added. “It’s sad that it’s happening on a college campus where we pride ourselves on diversity, especially here at SDSU.”

Noll says that SDSU’s six-week investigation, which involved help from the FBI, “included looking at all surveillance video, re-contacting the victim on several occasions and attempting to verify statements related to the entire case.”

“The victim made the decision to no longer pursue the matter and with no other leads we suspended the case,” said Noll, who added that the alleged incident was not captured on camera.

He also said that the woman’s story has remained the same during the investigation with the exception of the status of her car.

An investigation of an alleged pro-Trump hate crime in Hillsboro, Ore. has also stalled out due to a lack of leads.

Kara Stevens, a 28-year-old black woman, claimed that on the day after Trump’s win, she was attacked with a brick by two white men and threatened with rape and lynching in the parking lot of a supermarket.

Stevens claimed that her attackers, who were white men in their 30s and 40s, shouted Trump’s “Make America Great Against” slogan. They also drove a vehicle with a Trump bumper sticker, she said.

“I legitimately was coming to terms with the fact that I was probably going to die,” she told KGW news station.

“Just turn her into our sex slave,” she claims one of her attackers said. “‘When we’re done with her, we could string her up by a tree or something.'”

Mike Rouches, a spokesman for the Hillsboro police department, tells TheDC that the case is now suspended.

“Our detectives investigated this case and it is currently suspended. We didn’t have any suspects discovered and at this point we have run out of leads in the case,” he said.

“We didn’t have any video that showed any kind of assault or interaction. We search for witnesses and didn’t find any of those either,” Rouches added.

While the two incidents could indeed have occurred, several similar hate crime accusations have been debunked in the past several weeks.

A Muslim student at the University of Michigan was charged with filing a police report after she claimed last month that a Trump supporter threatened to set her on fire. In Mississippi, a black man was charged with arson for burning down his church on Nov. 1 and vandalizing it with “Vote Trump” graffiti.

Also this week, a YouTube personality named Adam Saleh appears to have falsely claimed that he was kicked off of a Delta Airlines flight just because he was speaking Arabic. Several passengers have since come forward to dispute Saleh’s claims. They say he was being disruptive on the plane on purpose.

And last week, a Muslim woman named Yasmin Seweid who attends Baruch College was charged with filing a false police report after she claimed that she was harassed by drunk white Trump supporters on the New York City subway. Seweid, who claimed that other passengers refused to help her during the attack, later admitted that she lied because she didn’t want to get in trouble for missing curfew.