The New York Times article on the intelligence assessment of Russian meddling in the election overstates a “preference” for President-elect Donald Trump that Russia developed, while downplaying the core motivations outlined in the report.

The assessment from U.S. intelligence agencies outlined in the report is that Russia’s goal when it crafted and implemented the influence campaign was to undermine the integrity of the U.S. election and to denigrate Hillary Clinton. Yet the NYT barely mentions these motivations in its breaking take on the report, and blasted out a headline wrongly declaring President Vladimir Putin “ordered” the campaign to help Trump.

“Vladimir Putin ‘ordered an influence campaign’ aimed at helping Donald Trump win,” the breaking news headline read. But the intel report did not state that Putin ordered the campaign to help Trump win. Rather, the report stated that intel officials believe Russia developed a “preference” for Trump late in the campaign. 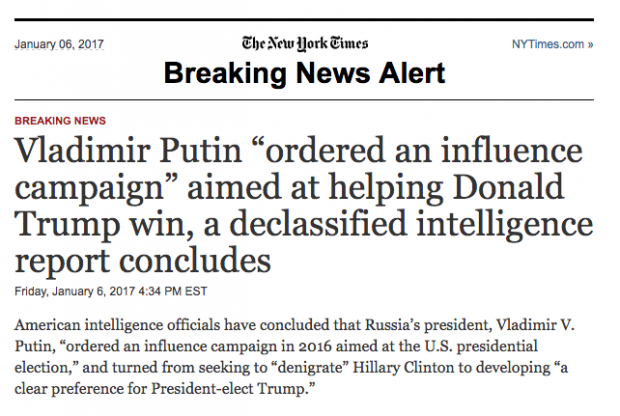 The intel report makes its assessment of Putin’s core motivations very clear: “We assess Russian President Vladimir Putin ordered an influence campaign in 2016 aimed at the US presidential election. Russia’s goals were to undermine public faith in the US democratic process, denigrate Secretary Clinton, and harm her electability and potential presidency.”

Since the report states Putin’s original intent had nothing to do with Trump, it’s not clear what conclusions can be drawn from Russia’s eventual siding with the president-elect. If Putin wanted to denigrate Clinton, it’s reasonable to assume he would have come to “prefer” any candidate opposing her in the general election.

“When it appeared to Moscow that Secretary Clinton was likely to win the election, the Russian influence campaign began to focus more on undermining her future presidency,” the intel report adds, making it clear that even as Putin developed a preference for Trump, the underlying goal was always to hurt Clinton.

The reporter who wrote the story told The Daily Caller News Foundation the omission of the line about Russia’s primary motivations was not deliberate. “The version you are looking at was written very quickly to get a first story on the web,” David Sanger told TheDCNF, adding that “newer, longer and better” versions of the story are coming.