The chaotic confrontations turned much of the city’s downtown corridor into a disruptive, and at times, a riotous, protest field.

Franklin Square — just blocks from the White House and the inaugural parade — was the site of a major anti-Trump demonstration that saw periodic clashes between police and protestors. At various points, a well-armed police line fired stingball grenades to disperse a burgeoning crowd, while demonstrators set fires, vandalized property, and shouted anti-Trump slogans. Protestors numbering well over 1,000 stymied traffic for several hours. Police helicopters hovered overhead, periodically descending towards the square, soliciting cheers from protestors, whose confidence grew as the day progressed.

At one point, a police vehicle drove through the crowd to scatter demonstrators, who were attempting to breach a riot police line. A number of protestors gave pursuit and attempted to confront the driver, though they were unsuccessful. Another demonstrator brandished a tire, allegedly stripped from a car with a pro-Trump sticker.

The apex of the confrontations came during the 4:00 hour, when protestors set fire to a limousine, which had been savaged with bricks and rocks early in the afternoon. Smoke poured high into a gray afternoon sky and was visible from several blocks away.

Adam Brown, a Trump supporter who came to Washington, D.C., for the inauguration, witnessed the start of the fire.

“After about a half hour, I noticed the car starting to smolder so we went up to it while black smoke started to emerge from the car, and when we got close people started to panic, thinking the thing was going to explode,” he told TheDCNF. “So I grabbed my friend and we got the hell out of there.

“These people are fucking nuts!” he exclaimed, shaking his head.

Elsewhere in the city, demonstrators shattered windows at various local businesses, including a Starbucks and Bank of America. 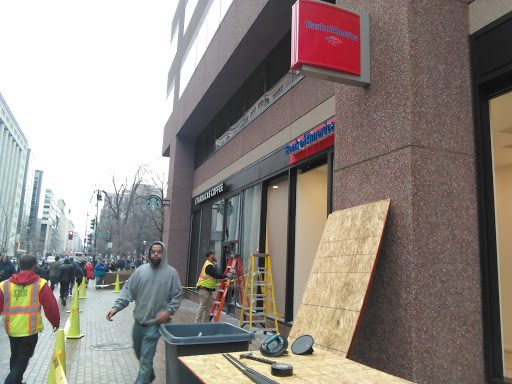 “We have at least twelve sites in this quadrant,” an official with S. Albert Glass Supply told TheDCNF. “We have over 100 broken windows,” the man, who asked not to be identified, said.

Farther down K Street, a sprawling anti-Trump action billed as a “Festival of Resistance” in McPherson Square attracted thousands of far-left demonstrators throughout the day. Organizers distributed food and medical supplies, while speakers including filmmaker Michael Moore and various activists representing identity groups including Black Lives Matter incited the crowd the action. Legal observers from the National Lawyers Guild were also on hand. The event, though large and loud, appeared peaceful.

Additional demonstrations may continue into the evening.