Stephen Miller argued that a judge cannot singlehandedly strike down the president’s executive order on immigration because we “have equal branches of government in this country.” 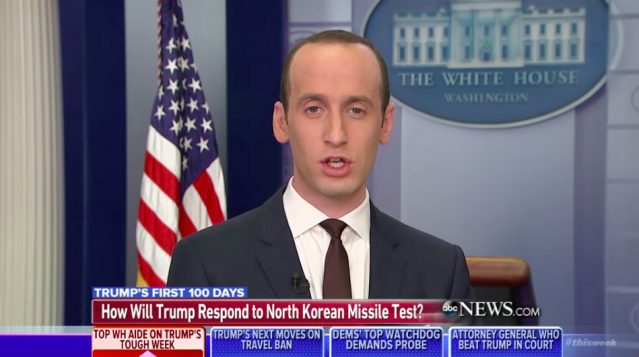 After a three-judge panel with the U.S. Court of Appeals for the 9th Circuit unanimously ruled to reject the Justice Department’s request to lift a Seattle judge’s restraining order on President Trump’s immigration order this week, his senior policy adviser said that the judicial branch is “not supreme.”

“The point I want to make to you, George, and the point I want to make to your listeners, is that we have equal branches of government in this country,” Miller told George Stephanopoulos during an interview on “This Week” Sunday. “The judiciary is not supreme. A district judge in Seattle cannot force the President of the United States to change their laws and our constitution because of their own personal views.”

“The president has the power under the INA, Section 212 F8 USC 82 F (ph) to suspend the entry of aliens when it’s in the national interest,” Miller continued. “He has that same power under an Article 2 power to conduct to the foreign affairs of our country. And we will do whatever we need to do, consistent with the law, to keep this country safe.”

“The reality is, is that this is not a disagreement about the law and the constitution. There is no constitutional right for a citizen in a foreign country who has no status in America to demand entry into our country. Such a right cannot exist; such a right will never exist. This is an ideological disagreement between those who believe we should have borders and should have controls, and those who believe there should be no borders and no controls. That’s the essence of this debate, and the bottom line is the president’s power in this area of represent the apex of executive authority. And we have multiple tools across multiple fronts to ensure that we are preventing terrorists’ infiltration of our country, and to ensure that those who enter our country share our values and support our people, something that is supported overwhelmingly by the vast majority of the American public.”

Stephanopoulos then asked Miller if he was calling into question the legitimacy of the judge.

“I’m calling into the question the accuracy of the ruling. For instance, the district judge in Seattle said there was no indication of terrorism from these seven countries in our country. That is a factually false statement,” Miller said.