Basic reporting errors by Reuters and NPR resulted in journalists falsely reporting that President Trump attended a foreign diplomat’s party at Trump’s D.C. hotel in what was portrayed as a possible pay-to-play scenario.

NPR and Reuters both reported that Kuwait’s ambassador to the U.S., Salem al-Sabah, was throwing a gala in honor of his country’s independence day at the Trump International Hotel. Reuters definitively placed the event as happening on Saturday, while NPR’s coverage implied the same.

According to Reuters, the event was expected to cost between $40,000 and $60,000. When Trump was spotted at the hotel on Saturday, a number of prominent journalists on Twitter spread the allegation that Trump was appearing at al-Sabah’s party after the ambassador gave Trump tens of thousands of dollars in business.

There’s just one problem — the party took place on Wednesday, not Saturday, hotel staff confirmed to The Daily Caller. But by the time the facts came to light, the media had already widely circulated the false story.

An editor at left-wing website Think Progress, Judd Legum, led the charge in cranking up the rhetoric surrounding Trump’s apparent cameo at his hotel during al-Sabah’s party. “The message is clear to foreign governments,” Legum declared. “Hold your lavish events at my hotel and I might stop by.” Other journalists spread Legum’s claims across Twitter, furthering the false narrative. (Legum has since deleted the tweets, although not before other Twitter users captured screenshots.)

Independent journalism nonprofit ProPublica, which is funded by left-wing financier George Soros’s Open Society Foundations, relied on Legum’s tweets and uncritically spread the false narrative, implying that Trump’s appearance at his hotel Saturday night was related to the money received for the Kuwaiti party. Sopan Deb, a reporter at The New York Times, retweeted ProPublica’s false tweet to his followers. 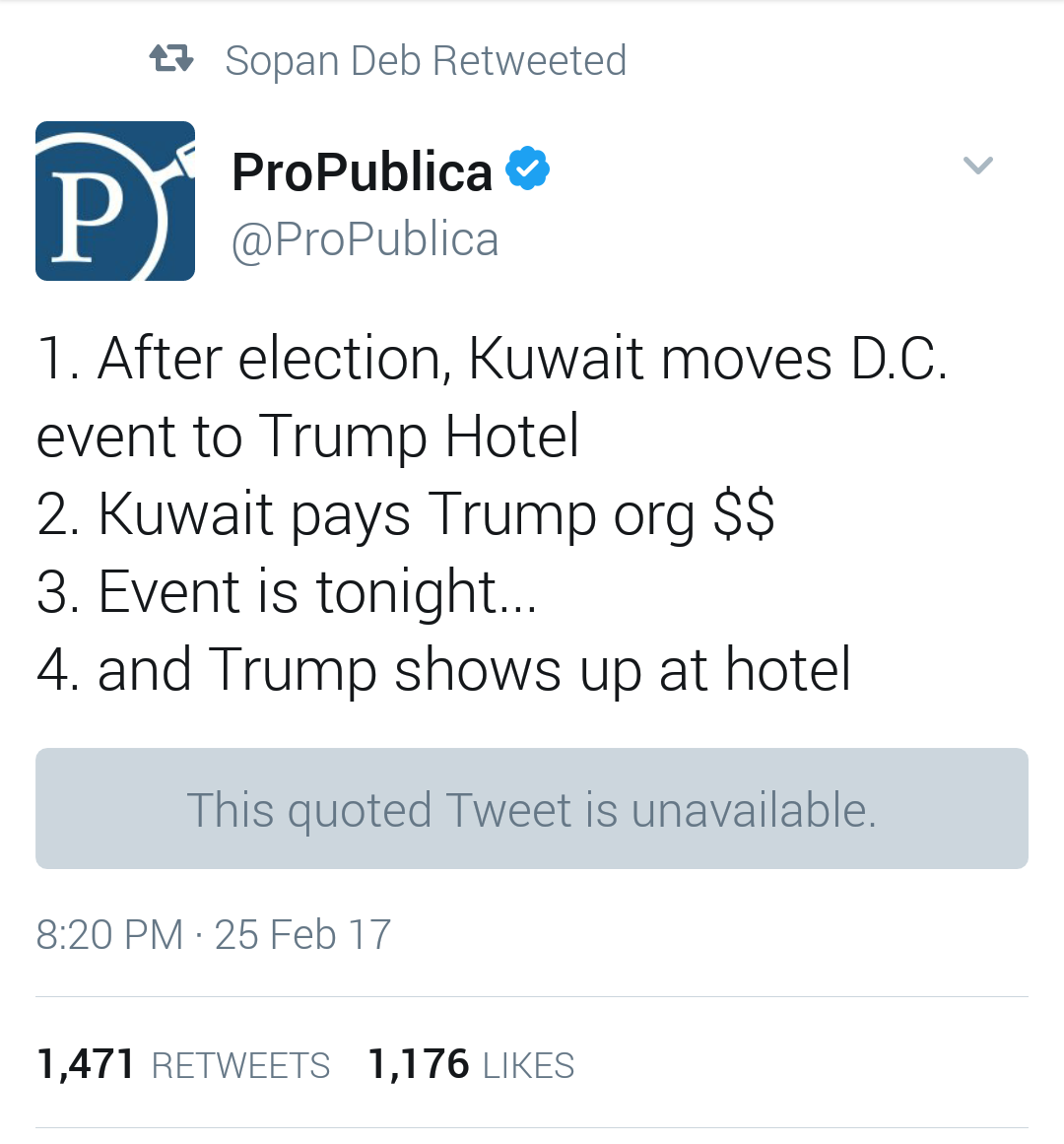 ProPublica later issued a tweet acknowledging the error, although the correction received a fraction of the retweets the original tweet did.

MTV senior political correspondent Ana Marie Cox, who also writes an interview column for the New York Times, sarcastically called “Trump swinging by the Trump hotel during the Kuwaiti gov event” a “big coincidence.” By press time, Cox had neither deleted nor corrected her tweet.

Trump swinging by the Trump hotel during the Kuwaiti gov event is a big coincidence I’m sure Spicy will explain. https://t.co/rn6UdAeUGO pic.twitter.com/5v19XtuW0t

By press time, neither Reuters nor NPR had corrected their stories to indicate that the Kuwaiti event took place on Wednesday.