David Cay Johnston is the reporter who received what appears to be the first two pages of Donald Trump’s 2005 tax returns and shared them on “The Rachel Maddow Show” Tuesday night.

The editor and founder of dcreport.org, which crashed Tuesday night during the 9 p.m. hour, said he received Donald Trump’s tax returns from 2005 in the mail Monday. The return revealed that Trump paid $38 million in federal income taxes on a reported income of $150 million in 2005.

“I was in Palm Beach on the sand looking at Mar-a-Lago, reporting on my next book which is about Trump, when one of my eight grown children informed me of what had come in the mail to my home in Rochester,” Johnston told The Daily Caller in an email Wednesday.

Johnston speculated that Trump might have been the person who mailed the figures to him.

“Donald has a long history of leaking material about himself when he thinks it’s in his interest,” Johnston said. “With Donald, you never know.” 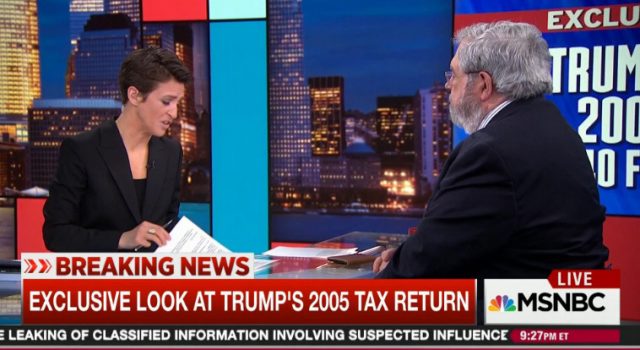 Johnston, a Pulitzer Prize-winning reporter, tweeted this out shortly before going on Maddow’s show.

On @maddow I’ll break a big story about Trump and his taxes – 9PM eastern via @DCReportMedia Ill be on @lawrence, too.

A White House official speaking on background said it was illegal for Maddow to release the president’s tax returns, while she argued it was her First Amendment right.

“You know you are desperate for ratings when you are willing to violate the law to push a story about two pages of tax returns from over a decade ago,” the official said in a statement Tuesday night.

“Before being elected President, Mr. Trump was one of the most successful businessmen in the world with a responsibility to his company, his family and his employees to pay no more tax than legally required. That being said, Mr. Trump paid $38 million dollars even after taking into account large scale depreciation for construction, on an income of more than $150 million dollars, as well as paying tens of millions of dollars in other taxes such as sales and excise taxes and employment taxes and this illegally published return proves just that. Despite this substantial income figure and tax paid, it is totally illegal to steal and publish tax returns. The dishonest media can continue to make this part of their agenda, while the President will focus on his, which includes tax reform that will benefit all Americans.”