As a presidential candidate, Donald Trump consistently railed against establishment Republicans, referring to them as “Dishonest people” and “the failing REPUBLICAN ESTABLISHMENT.”

Trump poked the establishment a month before the election, writing on Twitter, “The media and establishment want me out of the race so badly – I WILL NEVER DROP OUT OF THE RACE, WILL NEVER LET MY SUPPORTERS DOWN!”

It looked like Trump would continue his anti-establishment politics as president.

“The establishment protected itself, but not the citizens of our country,” he declared in his inaugural address.

But now, Trump is singing a different tune.

It’s not the establishment that has earned Trump’s ire, but rather the anti-establishment members of the House Freedom Caucus.

The caucus, comprised of roughly 30 of the most conservative Republicans, played a key role in blocking Republicans’ Obamacare replacement bill.

Speaker of the House Paul Ryan and other establishment Republicans led the (unsuccessful) charge to try and get the the bill — which performed disastrously in public opinion polls — passed through Congress.

Anti-establishment Republicans in the House Freedom Caucus as well as in the Senate fought the proposed legislation, which Trump later instructed Ryan to pull from the floor, so as to avoid a potentially humiliating loss.

Since the bill’s failure, Trump has directed his anger towards the House Freedom Caucus, even suggesting he may support primary opponents against members of the caucus.

“Democrats are smiling in D.C. that the Freedom Caucus, with the help of Club For Growth and Heritage, have saved Planned Parenthood & [Obamacare]!” Trump tweeted.

“The Freedom Caucus will hurt the entire Republican agenda if they don’t get on the team, & fast,” he wrote in another tweet. “We must fight them, & Dems, in 2018!”

“Freedom Caucus stood with [you] when others ran,” Idaho Rep. Raul Labrador, a member of the Freedom Caucus, replied. “Remember who your real friends are. We’re trying to help [you] succeed.” 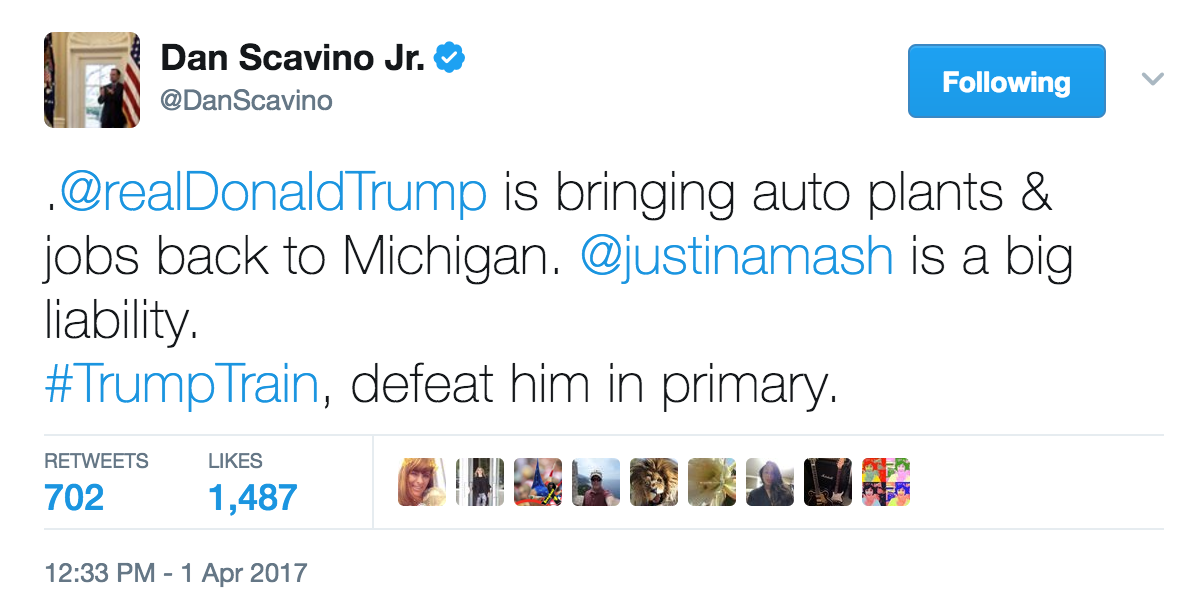 Amash fired back soon after, saying the Trump administration and GOP establishment have merged into the “Trumpstablishment” with the “Same old agenda: Attack conservatives, libertarians & independent thinkers.”

“I think it is really, really unhelpful to Donald Trump’s ultimate agenda to slam the very people who are going to be propping up his border wall, all the things he wants to do on immigration, on trade,” said conservative radio host Laura Ingraham.

“Now I don’t know who’s telling the White House to focus their anger on the Freedom Caucus, but I do think it’s misplaced,” Fox News host Sean Hannity said.

Both Hannity and Ingraham were among Trump’s biggest backers in conservative media during his presidential run. They both have also cultivated a fiercely anti-establishment brand.

Now, they’re signaling their displeasure that Trump is siding with the establishment that he and talk radio hosts — Hannity and Ingraham included — once counted as a common enemy.