How else would the world know that the pot smoking Twitter activist, who has been trying so hard to find relevance in Washington politics, is skiing and keeping his eyes glued on CNN.

PR guru Jonathan Franks — who has called me a “bitch” on multiple occasions — announced the news Tuesday.

Montel confirmed on Twitter that he’s in Park City, Utah.  The #NeverTrumper admitted that he could be a certain kind of Republican. “Just like I could be an @ananavarro Republican, I could be a @MargaretHoover Republican #GOPFuture,” he wrote.

Montel backed Ohio Gov. John Kasich in the 2016 presidential election and ultimately supported Hillary Clinton, who wouldn’t publicly acknowledge the love because of his despicable association to payday loans.

But how impressive that Montel finds time to kiss some TV ass on the slopes. 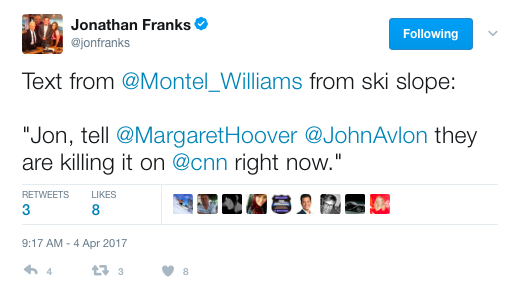 CNN contributor Margaret Hoover got a kick out of Montel’s remark. She wrote, “Hey @jonfranks – tell @montel_williams to crush that spring skiing #jealous!”

A Virginia follower, @GlenninVirginia, had wise advice for Montel: Don’t ski and tweet.

“He should watch out for the trees while tweeting; that didn’t end well for Sonny Bono, ya know.”