Rex Tillerson said it is clear “to all of us that the reign of the Assad family is coming to an end.” 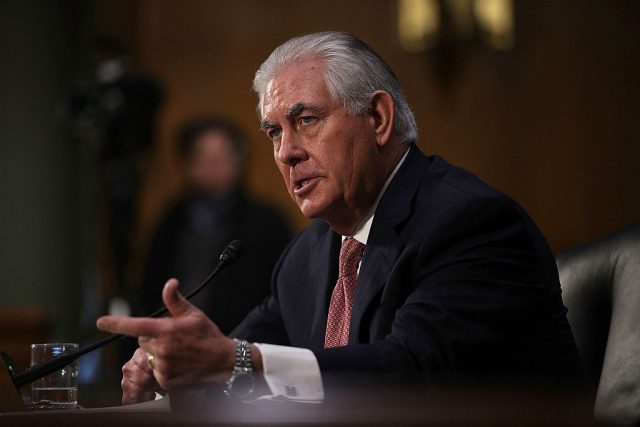 As the secretary of state spoke to reporters in Italy before he departed for Moscow Tuesday, he said a chemical weapons attack — like the one in Syria last week that left at least 80 people dead — must not be allowed to happen again. Tillerson said Russia should rethink its decision to ally with countries like Syria and Iran.

“We want to create a future for Syria that is stable and secure,” Tillerson said. “Russia can be part of that future and play an important role or Russia can maintain its alliance with this group which we believe is not going to serve Russia’s interest longer term.”

“Stockpiles and continued use demonstrate that Russia has failed in its responsibility to deliver on its 2013 commitment,” he continued. “It is unclear whether Russia failed to take this obligation seriously or Russia has been incompetent, but this distinction doesn’t much matter to the dead. We can’t let this happen again.”

“It is clear to all of us that reign of the Assad family is coming to an end, but the question of how that ends and the transition itself could be very important in our view to the durability, the stability inside a unified Syria.” (RELATED: Trump: ‘What Assad Did Is Terrible — Truly An Egregious Crime’)

Tillerson’s comment comes just hours after he said there was no change in U.S. policy on Syria regarding regime change.

“We’ve seen what that looks like when you undertake a violent regime change in Libya, and the situation in Libya continues to be very chaotic, and I would argue that the life of the Libyan people is not all that well off today,” Tillerson said during an interview Sunday. “So I think we have to learn the lessons of the past and learn the lessons of what went wrong in Libya when you choose that pathway of regime change.”

“Any time you go in and have a violent change at the top, it is very difficult to create the conditions for stability longer term.” (RELATED: Pentagon Casts Doubt On AP Report Claiming Russia Knew About Syrian Chemical Attack)