WASHINGTON — Sean Spicer briefed reporters from the White House on Wednesday. The press secretary — who was interrupted by New England Patriots tight end Rob Gronkowski — answered questions on sanctions in Iran and how the whereabouts of the U.S.S. Carl Vinson were confused. 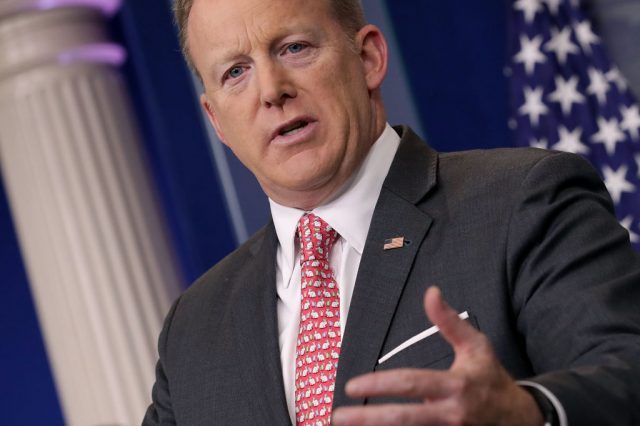 On the whereabouts of the U.S.S. Carl Vinson

The New York Times reported Tuesday that although “the White House declared that ordering an American aircraft carrier into the Sea of Japan would send a powerful deterrent signal to North Korea,” it was actually “sailing in the opposite direction, to take part in joint exercises with the Australian Navy.”

Spicer referred most questions about why the whereabouts of the carrier were never clarified to the Department of Defense.

On the special election in Georgia

“The reaction has been that they almost won. No, they lost. They threw everything including the kitchen sink at it and they lost. They said their goal last night was to win the race with over 50 percent. They lost.”

“The Democrats went all in on this. Their goal was 50 percent. They came up short.”

Is he concerned about Republicans? “We talked about changing the demographics throughout country [during the election] and made significant headway doing that. In large part, that’s why we won. I feel very confident about the state of the party.”

On reviewing the nuclear deal with Iran

“I think part of the review is to determine where Iran is with compliant with the deal. That’s why he’s doing a review. The point I’m making is he asked the interagency team to conduct a review. We have 90 days before the next one comes up.”

Is the president concerned they are cheating? “That’s why he’s asking for this review.”

And for the biggest highlight…