Eichenwald said on Twitter Friday night that he hopes every Republican who voted in favor of the American Health Care Act on Thursday sees a family member come down with a serious “long term” illness and lose their insurance before dying. When challenged, Eichenwald doubled down. “I want them to be tortured,” he said of Republicans who supported the AHCA. He added: “I want the [Republicans] who supported this to feel the pain in their own families.” 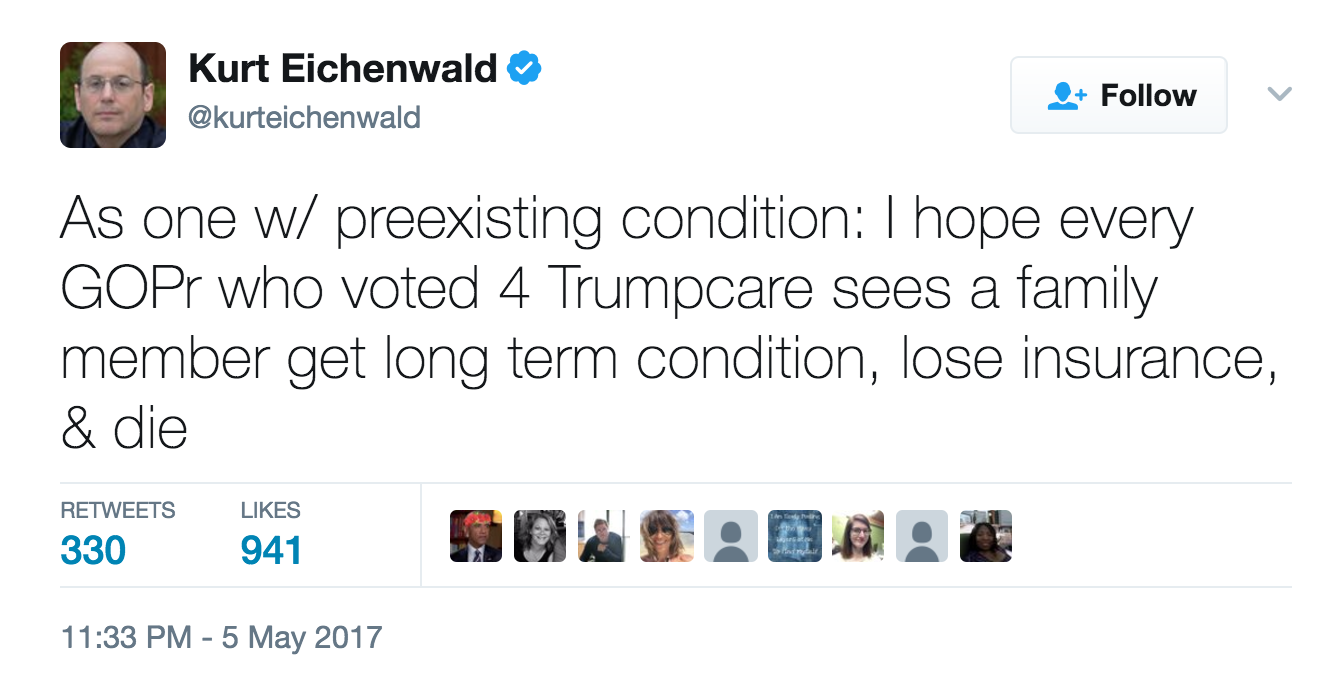 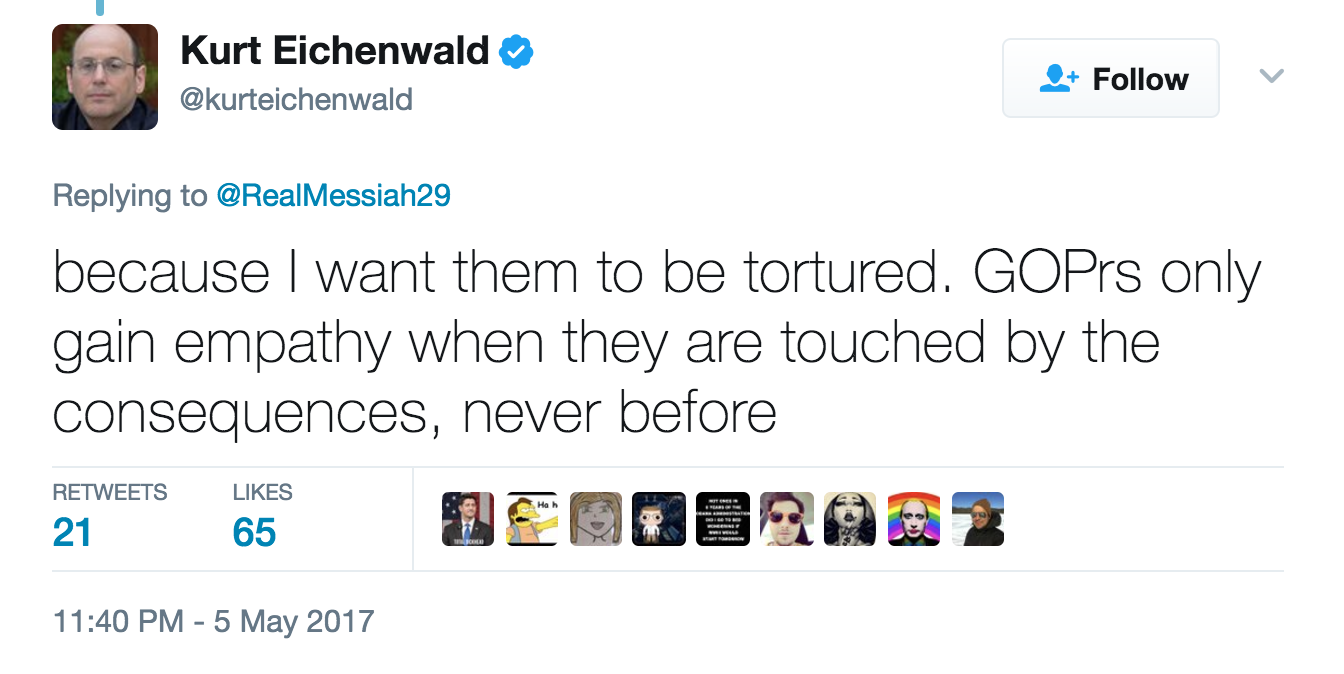 Kurt Eichenwald wants his political opponents “to be tortured” (Screenshot/Twitter)

Kurt Eichenwald, who wants innocent people to die, decries the “inhumanity” of his political opponents (Screenshot/Twitter)

In another tweet, Eichenwald spread the false claim that Republican congressmen celebrated the AHCA’s passage by drinking beer, saying their loved ones should die as a result. 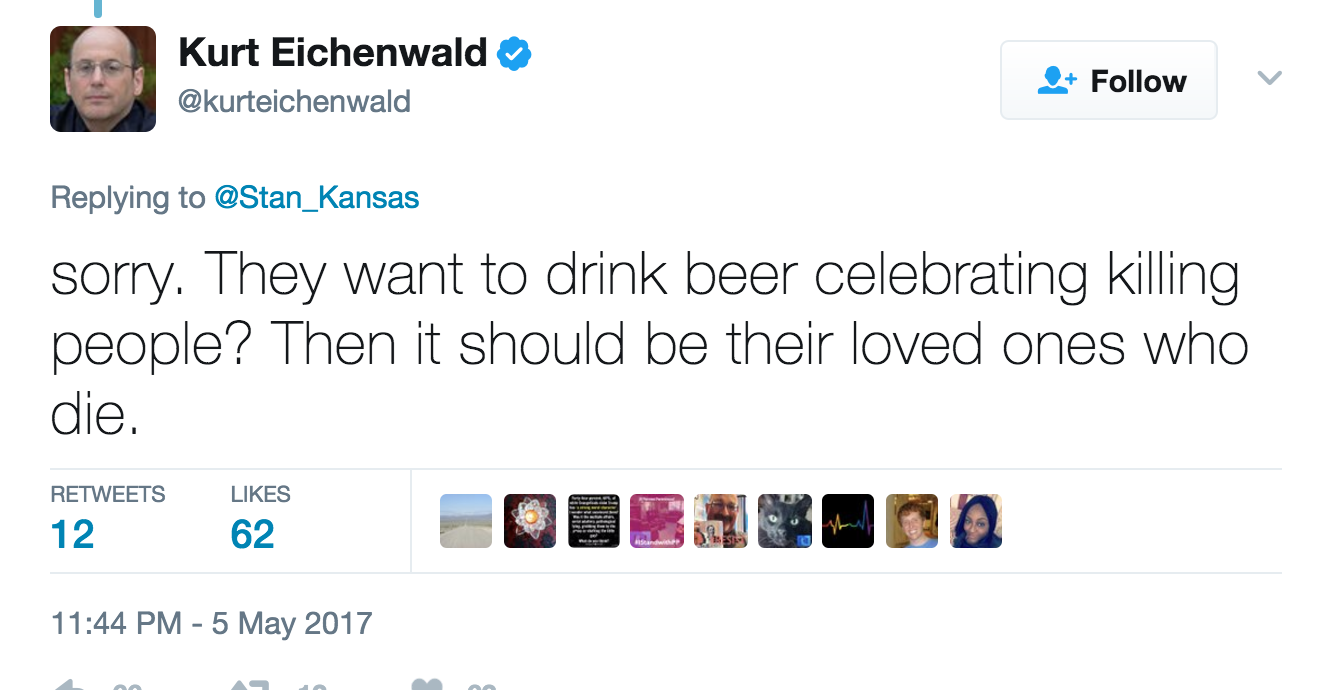 In addition to his position at Newsweek, Eichenwald describes himself on Twitter as a contributing editor at Vanity Fair and a contributor for MSNBC. Newsweek did not immediately respond to a request for comment.

Eichenwald’s insinuation — that the Republican Obamacare replacement is effectively sentencing Americans to death — is a favorite Democratic talking point that policy experts have said is unsupported by evidence.

Eichenwald is currently suing a man who he said caused him to have a seizure by sending a flashing image to him over Twitter. The FBI arrested the man in connection with the tweet, which Eichenwald said triggered his epilepsy. As reported by The Daily Caller’s Alex Pfeiffer, Eichenwald is looking at bringing similar civil lawsuits against as many as 90 people.

UPDATE: When asked for comment via email, Eichenwald replied with a 482-word statement, printed in full below:

On the record, and print my entire statement or I will tweet out that you refused: what my very clear point was, under trumpcare, if I lose my job, i am uninsurable, and I die. That is not a maybe or a could be – I die. My wife is a doctor and has patients with chronic diseases who will be uninsurable under trumpcare. Then you have a bunch of GOPrs drinking beer and cheering themselves that they put all of the lives of people like me at risk, and smug little propagandists like you who know nothing about medical economics falling on the fainting couch because people whose lives are now at risk tweet mean things. People vote for things they don’t understand and barf up false sound bytes to dismiss the real fears of death people like me now face, then propagandists subsumed by smug ignorance repeat false talking points rather than reading a book or studying the academic analyses. They say stupid things like “get treatment at an ER” as if ERs provide chemo or provide long term treatment for people with cystic fibrosis or hand out the kinds of medicine I need to live. They don’t. Or they say we have cancer or epilepsy or heart valve conditions because we live bad lives. My wife, who is four years older than me, is now saying she will have to work until she is 69 just in case i lose insurance, because when she is 69 I will be on Medicare. We stay insured, or i die. Simple as that. So if GOPrs who voted for this want to celebrate and cheer and drink beer without even knowing what they have done, and propagandists like you are too lazy or blinded by partisanship to call them on it, then it is clear all of you will only face reality when you confront it in your own lives. You’ll find emergency rooms don’t provide chronic care or long term treatment. They say “high risk pools” without acknowledging that they don’t work. The only way people incapable of empathy will understand reality is when they face it. So yes, to save millions, I think the people who inflicted these consequences on strangers should see the consequences up close and personal. I tweeted that. The goprs in congress didn’t just send out a tweet wishing for me to face my own death. They actually voted to do it. If people don’t give a damn about the consequences of what they do, they should face those consequences. They shouldn’t all be inflicted on strangers. I’m terrified that I won’t live to see my grandchildren. And you expect me to be nice to the people who created that situation? I want them to feel what millions of us are feeling tonight – fear, desperation, a knowledge that any moment could start the countdown to our deaths.

This article has been updated to include Eichenwald’s statement, as well as his tweet falsely claiming Republican congressmen drank beer after passing the AHCA.