“Our changing climate is already making it more difficult to produce food,” Obama said at the Seeds & Chips conference in Milan, Italy Tuesday, according to The New York Times.

“We’ve already seen shrinking yields and rising food prices,” the former president said in his first speech outside the U.S. since leaving office in January.

But is global warming already hurting agriculture? There’s not a lot of evidence for that claim.

In fact, 2016 was a record year for crop yields, which have basically doubled since 2007.

Production of wheat, coarse grains and rice hit record levels in 2016, according to United Nations data. Cereal production is set to shrink 0.4 percent in 2017 “from the 2016 record high,” but “supplies are likely to remain large with next season’s cereal ending stocks remaining close to their record high opening levels,” the UN reports.

As for food prices, they’re well below recent highs hit in 2010. UN data shows the inflation-adjusted food index — the average of five commodity price indices — is just below where it was in 1965. the food price index peaked around 1975. 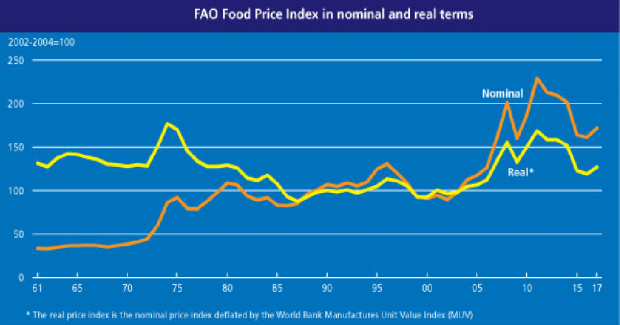 Credit: Food and Agriculture Organization of the United Nations

The Guardian reported “across Africa, yields from rain-fed agriculture could decline by as much as 50% by 2020,” summarizing UN findings.

Other experts say global warming, at least in the near-term, will be good for agriculture since increased carbon dioxide will boost plant growth. Current evidence suggests a “global greening” trend from increased CO2 from fossil fuel combustion.

Obama pocketed more than $2.7 million for Tuesday’s speech on how agriculture is contributing to global warming.

Ironically, the former president flew a private jet to Milan where a 14-car convoy and 300-strong police escort awaited him. Obama’s entourage included a helicopter and took up two floors of the more than $9,000 a night Park Hyatt hotel.

Obama’s speech focused on how greenhouse gas emissions from agriculture were on the rise, posing a problem for future development. Obama said “the energy to bring about change” in agriculture will come from ordinary people.

“It’s going to come from parents who are concerned about the impact climate change may have on their child, from business people who say how can we use less energy or waste less resources in making our products,” Obama said. “It’s millions of decisions made individually that have the ability to make changes.”