James Comey did not write detailed memos after his conversations with Barack Obama like he did with Donald Trump.

The former FBI director is scheduled to testify before the Senate Intelligence Committee Thursday at 10 a.m. In his prepared opening statement released by the committee Wednesday, Comey said he only spoke with Obama twice during his presidency, but talked to Trump nine times within four months of his.

He explained why he documented the conversations he had with Trump. 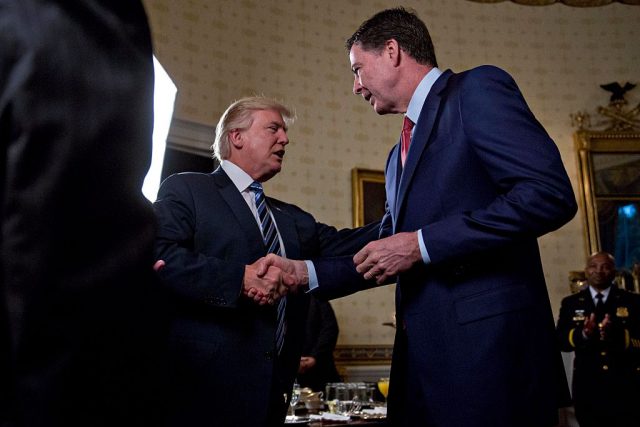 “I felt compelled to document my first conversation with the President-Elect in a memo,” Comey writes. “To ensure accuracy, I began to type it on a laptop in an FBI vehicle outside Trump Tower the moment I walked out of the meeting. Creating written records immediately after one-on-one conversations with Mr. Trump was my practice from that point forward.”

“This had not been my practice in the past,” he continued. “I spoke alone with President Obama twice in person (and never on the phone) — once in 2015 to discuss law enforcement policy issues and a second time, briefly, for him to say goodbye in late 2016. In neither of those circumstances did I memorialize the discussions. I can recall nine one-on-one conversations with President Trump in four months — three in person and six on the phone.”

Comey, who was appointed to be the director of the FBI by Obama in 2013, said Trump asked him to shut down the FBI investigation into former national security adviser Mike Flynn in one of his memos. (RELATED: Comey’s Prepared Remarks Ahead Of His Testimony Tomorrow)

“I immediately prepared an unclassified memo of the conversation about Flynn and discussed the matter with FBI senior leadership,” Comey said in his prepared remarks.

“I had understood the President to be requesting that we drop any investigation of Flynn in connection with false statements about his conversations with the Russian ambassador in December. I did not understand the President to be talking about the broader investigation into Russia or possible links to his campaign. I could be wrong, but I took him to be focusing on what had just happened with Flynn’s departure and the controversy around his account of his phone calls. Regardless, it was very concerning, given the FBI’s role as an independent investigative agency.”