The Islamic State has released a shocking image of Islamic militants killing Christians in the Philippines.

The Armed Forces of the Philippines has been fighting for over two weeks to liberate a city overrun by ISIS-linked militants. Abu Sayyaf and Maute fighters, members of terrorist organizations loyal to ISIS, seized control of Marawi in late May. The jihadis torched churches and schools, took Christian hostages, and, in one instance, slaughtered civilians who failed to quote scripture from the Islamic holy text, the Quran.

“The soldiers of the Khilafah in East Asia stormed the city of Marawi in the southern Philippines on the island of Mindanao, chased out the local police and the military, and raised the banner of the Islamic State,” the extremists wrote in the latest issue of Rumiyah, an ISIS publication.

The latest issue focuses heavily on the campaign in Marawi, which the Philippine government believes is an effort by ISIS to secure a foothold for radical Islamic terrorism in Southeast Asia. Included in the reports are previously-unseen photos, according to the terrorists, of militants murdering “belligerent” Christians, according to the SITE Intel Group. 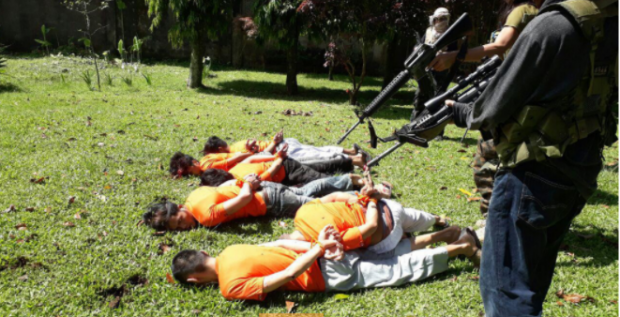 The military has been conducting airstrikes and ground raids against militant positions, but progress has been slow. The jihadis have snipers and are armed with anti-tank weapons. They hide in bomb-proof tunnels and use human shields, making the fight to liberate Marawi difficult, according to the Armed Forces of the Philippines.

Further complicating matters is the fact that the militants are believed to be holding around 100 hostages.

President of the Philippines Rodrigo Duterte has declared martial law in the southern Philippines. “I am not ordering you to take an ordinary police action. I am ordering you to crush our enemy,” Duterte told his troops, “When I say crush them, you have to destroy everything including lives.”

“I cannot stop my soldiers now. Let’s finish this war that you (IS) have started,” he added, “The objective of ISIS is to kill and destroy, period. So I will destroy also and kill.”

The military is expecting to drive out the ISIS militants and end the fighting in Marawi in the next couple of days.