Loretta Lynch, the former attorney general under Barack Obama, pressured former FBI Director James Comey to downplay the Clinton email server investigation and only refer to it as a “matter,” Comey testified before the Senate Intelligence Committee on Thursday.

Comey said that when he asked Lynch if she was going to authorize him to confirm the existence of the Clinton email investigation, her answer was, “Yes, but don’t call it that. Call it a matter.” When Comey asked why, he said, Lynch wouldn’t give him an explanation. “Just call it a matter,” she said. (RELATED: Bush AG Says Lynch Made DOJ ‘An Arm Of The Clinton Campaign’)

Comey added later that he was concerned about that direction as it was false. He was further concerned because it aligned with the Clinton campaign’s spin on the investigation.

Lynch’s order, Comey said, “concerned me because that language tracked the way the campaign was talking about the FBI’s work and that’s concerning.”

“I don’t know whether it was intentional or not but it gave the impression that the attorney general [Lynch] was looking to align the way we talked about our work with the way the political campaign was describing the same activity, which was inaccurate,” Comey added.

Comey complied, in his words, because it “wasn’t a hill worth dying on.” In February 2016, the FBI confirmed in a letter that the agency was “working on matters related to former Secretary Clinton’s use of a private email server.”

Comey said he believed at the time that the media wouldn’t buy into the Clinton campaign’s spin that it wasn’t a criminal investigation.

When asked by Texas Sen. John Cornyn if it would be fair to say Lynch had a “conflict of interest” in the Clinton email investigation, Comey answered in the affirmative. “That’s fair,” he said. 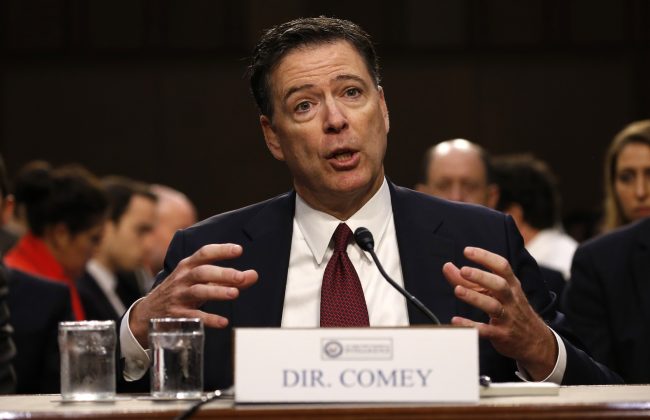 Comey cited that pressure from Lynch to downplay the investigation as one of the reasons he held a press conference to recommend the Department of Justice not seek to indict Clinton.

Comey also cited Lynch’s secret tarmac meeting with Bill Clinton as a reason he chose to hold the press conference, he said, as he was concerned about preserving the independence of the FBI.

The Clinton campaign consistently sought to mislead the public by denying that Clinton was the subject of an FBI investigation. Instead, the campaign claimed the investigation was a simple “security inquiry.” Comey said he was concerned by Lynch’s pressure on him and the FBI to use the campaign’s spin, as it appeared it appeared that Lynch was intentionally trying to align the language the FBI was using to match the angle pushed by the Clinton campaign.