“The one lesson I’ve learned in digital media is never apologize to anyone online. Someone somewhere will always be mad.”

“Next I’ll reveal which MSNBC host… who used to be a Republican… is now one of the loudest liberals on the trump-bashing network.” — Hannity.

“Hannity is a carbon copy of his orange mentor. Accuse everyone of the things they themselves are guilty of. Moronically obvious.” — Andy Lassner, executive producer, “The Ellen Show.”

“Coming out of GOP lunch, Sen. Cassidy argues for requiring maternity care: ‘As best as I can tell women don’t get pregnant without sperm, ok.'” — MSNBC’s Kasie Hunt. 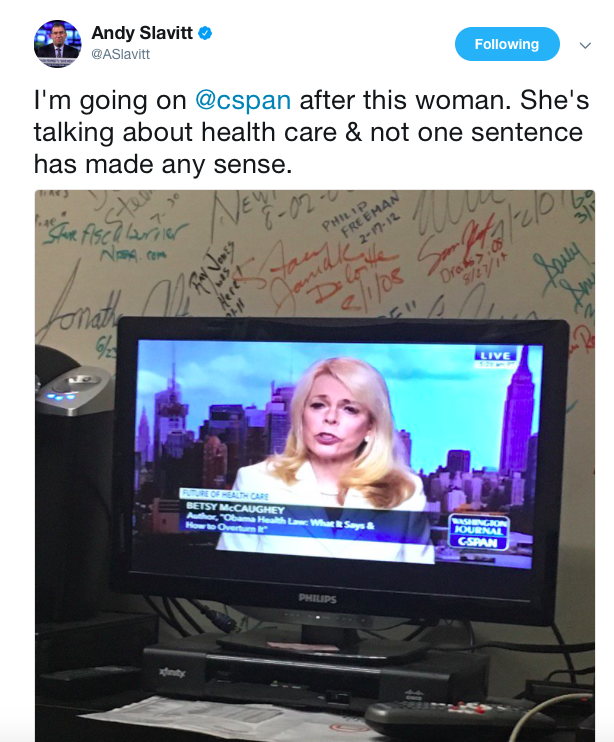 This arrived after President Trump unleashed a tweet accusing Mika Brzezinski of bleeding while at Mar-a-Lago due to a facelift.

“This is pathetic. Ask yourself this question — if someone said this to your mom, your sister, your girlfriend, what would you do?” — Jonathan Franks.

Memo to Franks: This is sentimental national wisdom and all, but Franks has personally called me a “bitch” and a “whore” on Twitter. So come on, please, Franks, get your own act together and your “advice” might make a shred of sense.

CNN was the lead story on all 3 @FoxNews prime time shows tonight. pic.twitter.com/cUIuwod9aN

“I once published a post that got many million clicks but was not long enough to be monitized in a meaningful way. I have never felt dumber.” — Mother Jones senior editor Ben Dreyfuss.

“I dated someone who didnt like popcorn once. still not sure how I did it.” — BuzzFeed‘s Tracy Clayton.

And this: “It is completely amazing to work on a team that fully and genuinely supports your mental health. I’m so grateful. When I was struggling really bad my darling producer boss set a weekly reminder to remind me to call a therapist. They understand when im too sad to come in. They leave love notes on my desk just bc. They let me cry on photoshoots. They’re patient with me.”

CNN producer is having feet problems

But it appears his feet is not Jason Morrell’s only issue.

Morrell is a supervising producer for and creator of “State of America With Kate Bolduan.”

Please note: Admittedly, I antagonized him. 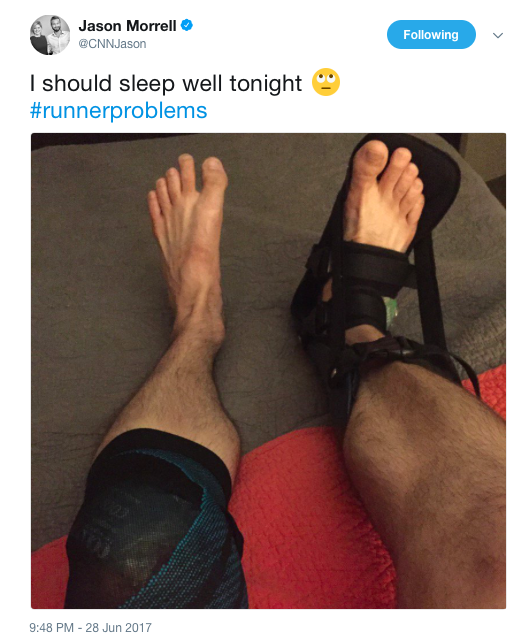 Me:  Just what I wanted to see — a selfie of this CNN producer’s feet.

Morrell: We have to look at your profile pic so why should my feet bother you? [He later said something nice that sort of cancelled this out.]

Me: Ohhh…I think you’ll survive it.

Morrell: Unfollow me Betsy. You won’t have to see or hear from me again.

Me: Why would I unfollow you? You obviously have valuable things to share.

Morrell: Thanks. Not sure why you’re always picking a fight though. I have no beef with you.

Morrell: And yes even CNN producers have feet. Can you believe it. [sic]

Me: Do you have amnesia? You started a fight with me last week. I didn’t even know who you were.

Morrell: I didn’t start a fight with you. I took issue over ur premise that a journalist should be beat up. It wasn’t personal. You took it that way.

Me: Not my fault you didn’t understand my story. And you did start it. And it was personal — quickly. And least own it, Morrell.

Morrell: You can call me Jason. And I wasn’t the only one who didn’t “understand”‘it. But anyway water under the bridge. Now I gotta go ice.

Me: JASON: Here’s what you said to me last week. Not even remotely not personal. Others are dumb, so you have to be too?
ENJOY YOUR ICE….JASON. Talk soon. #xoxo.

Morrell: Ok ok no more feet selfies. I just wanted some pity since my body is all broken. Nite everyone. May my ugly feet not haunt your dreams.

NOTE TO VIEWERS: It’s right-wing outlets asking about the media (aka a set-up). It’s the real reporters asking about healthcare, Syria, etc.

Stephen Miller is a contributor to the right-leaning HeatStreet.

“Real reporters like the 3 just let go from your network?”

“When people you don’t even know hate you, that’s when you know you’re the best.” — Paris Hilton.

Khloé Kardashian crowdsources a solution for her hangover

“Thank you for the hangover tips. Good old greasy food it is!! Oldie but a goodie! I’ll work it off later.” — Khloé Kardashian, reality star, girlfriend to Cavs player Tristan Thompson.

Reporter goes on a tear against CNN’s Jim Acosta

“Weird that [CNN White House correspondent] @Acosta feels need to point out that [American One News White House reporter] @TreyYingst is from a conservative outlet before praising a question he asked during briefing.” — Brent Scher, reporter, Washington Free Beacon.